You are at:Home»Currency-Hedged»Here’s What’s Creating Momentum For Japan ETFs 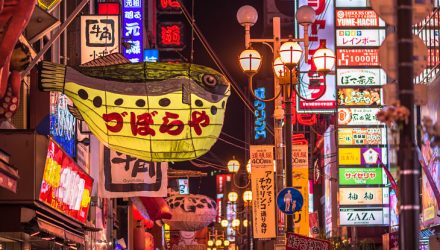 The iShares Currency Hedged MSCI Japan ETF (NYSEArca: HEWJ) and Deutsche X-trackers MSCI Japan Hedged Equity ETF (NYSEArca: DBJP) are among the other well-known Japan ETFs for investors to consider. Both are currency hedged and could surge if the yen weakens against the U.S. dollar.

The Bank of Japan’s loose monetary policies along with a wider rising rate differentials between the U.S. and Japan could support a depreciating Japanese yen currency over the short-term, which would bolster the export-heavy Japanese market. An issue for EWJ is its lack of exposure to smaller Japanese companies, some of which are delivering impressive returns this year.

“A further support is the BoJ’s ultra-easy monetary policy, which contrasts with a normalizing Federal Reserve and a looming step change in the European Central Bank’s monetary stimulus. We see this helping keep the yen in a stable trading range. A sharp rise in the yen is the main risk to the Japanese equity rally,” notes BlackRock.