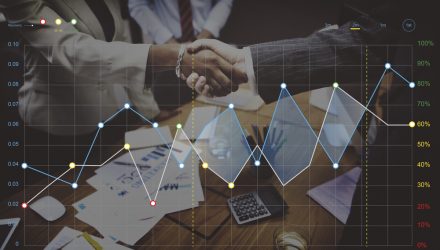 While the fund is sporting a new look, its objective of delivering stout shareholder yield — the combination of dividend yield and buyback yield — remains in place. WTV looks to accomplish that objective while emphasizing quality stocks, but that doesn’t mean investors will pay up for the privilege. Actually, the new ETF looks attractive on valuation today.

“WTV is currently valued at a steep discount to the Russell 1000 Value and S&P 500 indexes across almost every measure of value, including a more than 30% discount to the value benchmarks on price-to-earnings,” writes WisdomTree analyst Kara Marciscano in a recent note. “In our view, WTV uses one of the most effective measures of value to select its constituents—shareholder yield. The companies in WTV are returning significant levels of capital, through dividend and buybacks, relative to their market capitalization.”

The combination of shareholder yield and the quality sets a higher bar for entry, and it’s one that many companies can’t clear, as highlighted by the fact that WTV is home to just 146 stocks. However, the fund maintains diversification by not allocating more than 1.79% of its weight to any component.

Additionally, the WTV methodology is paying off because the quality and shareholder yield points of emphasis helped it top some widely followed benchmarks in 2021.

Those feats were accomplished by allocating to the highest shareholder yield companies. Remembering that shareholder yield is a combination of dividend and buyback yield, WTV isn’t embracing high-dividend stocks, some of which sport high yields for negative reasons. In fact, not all of the fund’s holdings pay dividends, indicating that some are dedicated buyers of their own shares.

“With a shareholder yield of 7.4%, WTV is valued very attractively relative to both the Russell 1000 Value and S&P 500 indexes, both below 3%,” concludes Marciscano.

Speaking of good deals, WTV’s expense ratio was trimmed to 0.12% from 0.26% as part of the rebranding.