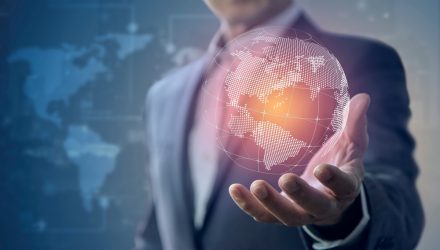 WisdomTree has announced today the launch of its latest fund on the NYSE, the WisdomTree Emerging Markets ex-China Fund (XC), for investors who are interested in emerging market allocation, who wish to avoid government-owned companies, and who wish to control more targeted investment to China through a complementary fund.

“As the Chinese market capitalization ballooned over the last two decades, investors with broad emerging markets exposure now have approximately 1/3 of their exposure in a market that is experiencing an incredible amount of both headwinds and tailwinds, making it complicated to implement specific asset allocation views. We believe reasonable valuations and depressed sentiment are primed to transition to a more favorable environment for emerging markets going into 2023,” said Jeremy Schwartz, CFA and global CIO at WisdomTree, in the press release.

“Geopolitical uncertainty is very high -particularly with respect to China and US relations. Controlling China allocations with a dedicated sleeve make sense and XC provides a core approach focused on the non-state-owned companies that give a growth tilt to non-China companies,” said Schwartz in a communication to VettaFi.

“This is a nice expansion of our ex-state-owned family complementing the dedicated China fund (CXSE) and broader EM fund (XSOE),” explained Schwartz.

Government-owned companies tend to run their businesses with somewhat different priorities, geared more towards the broader focus of the government’s agenda than on what would be most beneficial and profitable for the individual company. This can have significant repercussions over a longer time horizon, with SOEs underperforming their non-SOE peers. 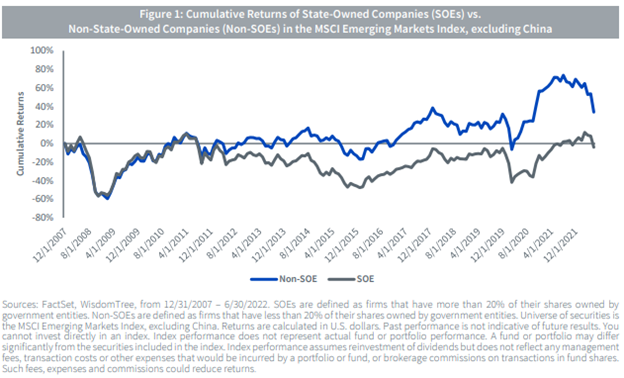 According to WisdomTree research, the standardized annual return of non-SOE companies since 31 December 2007 through 30 June 2022 from within the MSCI Emerging Markets ex-China Index is 2.03% compared to SOEs over the same period with a return of -0.28%.

Non-government corporations have also been growing their representation in “new economy” sectors within emerging markets, including communication services, consumer discretionary, consumer staples, healthcare, industrials, and information technology, some of the most growth-oriented sectors. In comparison, SOEs tend to remain clustered in “old economy” sectors focused around energy, financials, materials, real estate, and utilities. Investing in non-SOE companies allows for higher capture of growth companies and those generating greater returns.

XC seeks to track the WisdomTree Emerging Markets ex-China Index, a modified float-adjusted market-cap-weighted index that excludes companies domiciled or incorporated in China as well as companies that have more than 20% government ownership, the criteria by which WisdomTree defines a state-owned-enterprise.

The index also screens for ESG and excludes companies that are in violation of the Global Standards Screening guidelines and the UN Global Compact Principles as well as companies involved with the manufacture or distribution of core weapon systems, or have considerable involvement in the tobacco industry or in thermal coal activity.

“Unlike other emerging market ETFs that currently exclude Chinese companies, the new fund takes a pro-good-governance approach. XC is like some popular WisdomTree funds that screen out state-owned enterprises from other major markets,” said Todd Rosenbluth, head of research at VettaFi.