You are at:Home»Modern Alpha Channel»Use a Currency-Hedged ETF to Target Japan as the BOJ Maintains Loose Policies 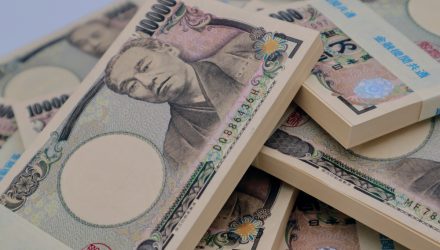 Currency-hedged Japan country-related exchange traded funds could continue to be a better way to access the Japanese markets as the yen currency depreciates in the face of a loose monetary policy outlook.

The currency-hedged WisdomTree Japan Hedged Equity Fund (NYSEArca: DXJ), which hedges against the negative effects of a depreciating yen currency relative to the USD, is up 3.7% over the past month.

Bank of Japan Governor Haruhiko Kuroda on Wednesday warned that the recent spike in inflation due to higher import costs could weigh on the economy, but he still reaffirmed the central bank’s intent to keep monetary policy ultra-loose, Reuters reports.

“The outlook, however, remains highly uncertain due to the impact of the pandemic, as well as developments regarding Ukraine and the impact on commodity prices,” Kuroda warned in a speech to an annual meeting of trust banks.

Consequently, Kuroda argued for the BOJ’s continued massive stimulus measures to support the economy, which has yet to fully recover to pre-pandemic levels.

However, while the recent weakness in the yen currency has helped the country’s export-heavy industries, Japanese consumers are seeing the negative effects from higher costs of imports. Finance Minister Shinichi Suzuki warned markets against pushing down the yen, since the recent rapid moves in the yen were “undesirable.” The yen continued to depreciate against the U.S. dollar on Wednesday, dipping below 126 against the greenback for the first time since May 2002.