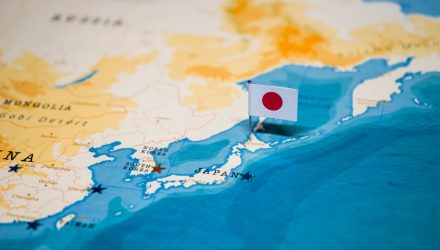 The Case for Investing in Japan With DXJ

Japan may be one of the only countries that could be getting inflation mostly right this year when much of the world’s economies are engaged in monetary tightening.

It’s been a long road for Governor Haruhiko Kuroda, who set a 2% inflation target for Japan back in 2013 that has yet to be achieved, reported the WSJ. Inflation is currently around 3% in Japan, buoyed by the spike in global energy prices this year as well as the impacts of the strong dollar on an increasingly weak yen that equates to higher import prices for the country.

The Bank of Japan has forecast 1.6% core inflation (taking out energy and food) by March 2025. Japan has historically struggled with sluggish growth on either flat or falling prices that dampened both corporate investments and wage growth. This year that trend has changed, with companies raising prices significantly for the first time, though wages continue to lag.

Wage growth is a major focus for Fumio Kishida, Japan’s Prime Minister, who recently passed incentives for companies that increase wages: wages were up 1.7% in August, leaving workers at a deficit after inflation.

“The highest priority has to be on wage increases that match the rise in prices,” Kishida said recently at a news conference.

Still, Japan remains one of the only countries that is engaged in easing while the U.S. and much of Europe tighten, providing a strong counterpoint and area of opportunity for advisors and investors looking internationally.

In an environment where Japan is still practicing quantitative easing while the U.S. aggressively tightens, the yen has weakened considerably this year. A weakening yen is an attractive selling point for multinational companies looking for cheaper manufacturing opportunities. This could drive industrial growth and strengthening in Japan and create strong opportunities for investors, one that the currency-hedged WisdomTree Japan Hedged Equity Fund (DXJ) seeks to capture.

DXJ offers investment into the Japanese equity market while hedging for currency fluctuations. It’s a pure play on Japanese stocks, as it removes the impact that the yen’s value has while still offering exposure to Japan’s equities. It is a popular choice when the yen is weak relative to the U.S. dollar.