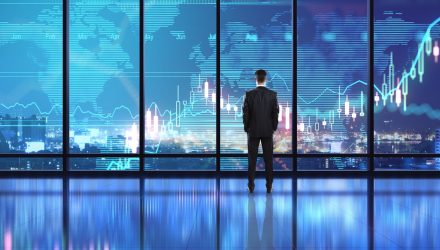 Investors in ETFs should consider the benefits of currency-hedging in international allocations to help access a “truer” exposure to foreign markets.

In the upcoming webcast, What’s Your Strategy for International Allocations? Seeking Opportunities Against Geopolitical Risk and the Strong Dollar, Jeremy Schwartz, global chief investment officer at WisdomTree, argued that exposure to currency risk can add or detract from developed international returns. Investors who own developed international unhedged have suffered historically heightened volatility compared to currency-hedging ETFs. Currently, the higher interest rates in the U.S. compared to abroad mean investors are also receiving positive carry by hedging as well.

Schwartz noted that several factors may affect the currency markets through either momentum, interest rates, or value. For example, there is a tendency for currencies to appreciate following a previous appreciation and depreciate after prior depreciation. Herding speculators, flight to safety as a result of market shocks, delta hedging from banks, and divergence in market participant beliefs about currency fair value can amplify currency trends.

Looking at government and monetary policies, Schwartz pointed out that current account deficit countries offer higher real interest rates to attract foreign capital into the economy. Exporters of capital are rewarded through interest rates for taking on currency risk as currency does not depreciate by as much as implied by the FX forward rate pricing.

The interest rates signal shows that if the implied interest rate in the U.S. is greater than that of a targeted currency using one-month FX forward rates, a hedge ratio of 33.3% is applied to the index.

This more dynamic currency-hedged approach could help increase returns when investing in international markets, according to Schwartz.

“Since inception, our Dynamic model has tended to add value versus unhedged strategies. During periods of stress, the U.S. dollar has tended to appreciate, exacerbating drawdowns for unhedged positions,” Schwartz said.

Specifically, the WisdomTree Dynamic Currency Hedged International Equity Fund (CBOE: DDWM) seeks to track the performance of dividend-paying companies in the industrialized world outside of the U.S. and Canada while at the same time dynamically hedging exposure to fluctuations in the value of the applicable foreign currencies relative to the U.S. dollar. The underlying index is comprised of companies incorporated in 15 developed European countries, Japan, Australia, Hong Kong, Israel, and Singapore. The underlying benchmark is designed to remove from the index performance the impact of changes to the value of foreign currencies relative to the U.S. dollar with a hedge ratio ranging from 0 to 100% every month.

Schwartz also added that the high dividend factor has shined in a down market, with dividend stocks outperforming the value, minimum value, minimum volatility, momentum, quality, and growth factors so far in 2022.

Separately, Liqian Ren, director of Modern Alpha at WisdomTree, highlighted the benefits of ex-state-owned companies, which can be key to long-term growth in the emerging markets. Government-owned companies tend to run their businesses with somewhat different priorities, geared more towards the broader focus of the government’s agenda than on what would be most beneficial and profitable for the individual company. This can have significant repercussions over a longer time horizon, with SOEs underperforming their non-SOE peers.

Financial advisors who are interested in learning more about international investing strategies can watch the webcast here on demand.