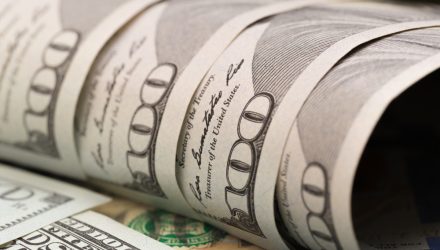 The Model Portfolio for Dealing with Fiscal Deficits

If there’s one thing Uncle Sam is good at, it’s running fiscal deficits. That situation could become even more pronounced with the results of the upcoming elections. Advisors can utilize fixed income model portfolios to position client assets for regime change in Washington and the specter of rising deficits.

The model portfolio is relevant today; even without the coronavirus pandemic, fiscal deficits were soaring.

“For FY 2020, the total deficit came in at $3.1 trillion, a record shortfall, especially compared to a red ink total of $984.4 billion for FY 2019. In addition, it was more than double the previous high watermark of $1.4 trillion that was printed in 2009,” writes WisdomTree Head of Fixed Income Kevin Flanagan.

Will a post-pandemic world not be conducive to the U.S. dollar? With trillions of dollars necessary to fight the coronavirus pandemic coupled with de-globalization, the greenback has major headwinds forthcoming.

Inverted yield curves from the bond market, a reliable recession indicator, could be a trustworthy sign. The ballooning budget deficit could be another. Both could hurt U.S. equities in the long run.

“The U.S. government’s budget deficit ballooned to nearly $1 trillion in 2019, the Treasury Department announced Friday, as the United States’ fiscal imbalance widened for a fourth consecutive year despite a sustained run of economic growth,” a Washington Post report said. “The deficit grew $205 billion, or 26 percent, in the past year.”

“The country’s worsening fiscal picture runs in sharp contrast to President Trump’s campaign promise to eliminate the federal debt within eight years,” the report added. “The deficit is up nearly 50 percent in the Trump era. Since taking office, Trump has endorsed big spending increases and steered most Republicans to abandon the deficit obsession they held during the Obama administration.”

“Without much of a surprise, it was the surge in spending that accounted for 98% of the increase in the overall deficit, as total outlays exploded by more than $2.1 trillion,” notes Flanagan. “The three key contributors were the Departments of Health & Human Services, Labor and the Treasury, all areas of the federal government that were profoundly impacted by the pandemic response.”