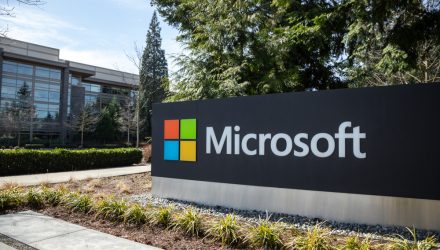 How Will This New Cybersecurity ETF Respond to the Microsoft Hack?

Over the weekend, news broke that tens of thousands of Microsoft customers were victims of a cyber attack with ties to China. The latest large-scale hack could bring opportunity for investors with the newly minted WisdomTree Cybersecurity Fund (NASDAQ: WCBR).

WCBR, which debuted in January, tracks the WisdomTree Team8 Cybersecurity Index. That benchmark “is designed to track the performance of companies primarily involved in providing cyber security-oriented products that meet Index eligibility requirement,” according to WisdomTree.

WCBR has utility as a long-term play for tactical investors corporations and governments are diverting more and more funds to fight the growing number of cyberattacks.

“Businesses and government agencies in the United States that use a Microsoft email service have been compromised in an aggressive hacking campaign that was probably sponsored by the Chinese government, Microsoft said,” reports The New York Times. “The number of victims is estimated to be in the tens of thousands and could rise, some security experts believe, as the investigation into the breach continues. The hackers had stealthily attacked several targets in January, according to Volexity, the cybersecurity firm that discovered the hack, but escalated their efforts in recent weeks as Microsoft moved to repair the vulnerabilities exploited in the attack.”

Will the Hack Prompt Further Investment?

In the age of digital communications, an increasing number of professionals are growing concerned about digital threats, bolstering demand for cybersecurity. Investors can also capitalize on this growing industry through sector-specific ETF plays.

The Microsoft hack may be the tipping point that helps drive change in governmental policies, compliance, and business responses, elevating cybersecurity to a societal-level risk.

“In the hack that Microsoft has attributed to the Chinese, there are estimates that 30,000 or so customers were affected when the hackers exploited holes in Exchange, a mail and calendar server created by Microsoft,” according to the Times. “Those systems are used by a broad range of customers, from small businesses to local and state governments and some military contractors. The hackers were able to steal emails and install malware to continue surveillance of their targets, Microsoft said in a blog post, but Microsoft said it had no sense of how extensive the theft was.”

The breach is likely to lead to elevated spending on security—a powerful and long-term demand tailwind for the sector, highlighting long- and short-term opportunities with WCBR.