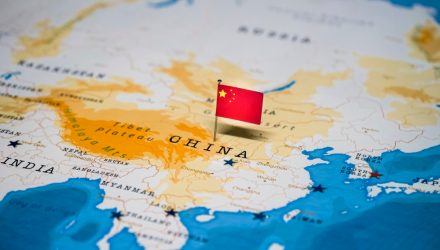 While China’s Communist Party meeting earlier this year put fear into markets, recent news that the nation is considering finally loosening up its COVID-19 policies may offer the nation’s economy a boost. That boost couldn’t come at a better time given this week’s less-than-stellar economic news for Chinese exports. For investors excited by the prospect of China’s economy reopening, a China consumers ETF like the WisdomTree China ex-State-Owned Enterprises Fund (CXSE) may be appealing.

The nation’s zero-COVID policy has been noted by observers as a serious challenge for the country’s economy, with quarantine and testing policies that prompted protests in various parts of the country. Not only were those policies onerous for day-to-day life in the bustling nation, but they also limited consumers’ ability to participate in the economy.

Reopening may offer a strong opportunity to buy the dips in the coming months. While this week’s news wasn’t ideal, the MSCI China Index has jumped 37% during the last five weeks. According to Bank of America’s co-head of China equity research, large-cap, heavy liquid names are worth considering as possible beneficiaries of the reopening, along with transportation-related areas like airlines, airports, and hotels.

CXSE presents itself as a China consumer ETF, excluding state-owned enterprises and prioritizing consumer business names like Alibaba (BABA) which it holds at 9.8%, or consumer/travel companies like Meituan (MPNGY) which it holds at 5.36%. Tracking the WisdomTree China ex-State-Owned Enterprises Index, CXSE charges a 32 basis point fee.

The ETF, which launched in 2012, has taken in $21.6 million in net inflows over one month and $72 million over one year, while also outperforming the ETF Database Category Average and the Factset Segment Average over one month, returning 13.3%.

It remains to be seen whether the Chinese government adds further measures to support domestic consumption if exports continue to struggle. Should the nation’s loosened COVID-19 measures keep cases down while also unleashing the economy for travel and shopping, a China consumers ETF like CXSE could be an interesting opportunity entering a new year in which the U.S. economy faces its own challenges.