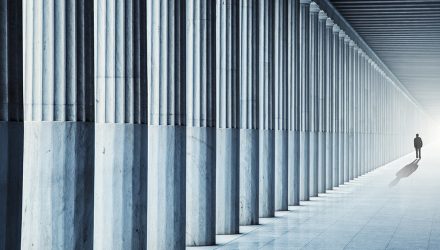 The “word of the week” in the U.S. financial markets last week was no doubt “inflation.” I’m well aware I wrote an inflation blog last week, but how can you not address the 800-pound gorilla in the room? In both the April CPI and PPI reports, the Bureau of Labor Statistics seemed to be using language like “largest increase/advance since…” on multiple occasions. That’ll get anyone’s attention!

What struck me as an interesting tidbit as the week came to a close was the “state of the consumer.” Following the inflation fireworks, the markets received two different reports that are directly related to the consumer sector of the economy: Retail Sales and the University of Michigan’s Surveys of Consumers.

Each of these releases contained something noteworthy. Let’s look at the Advance Retail Sales report first. Following March’s upwardly revised surge of +10.7%, the April result came in unchanged. This lower-than-projected performance appeared to reflect some “payback” from the positive effects of the $1,400 stimulus checks that went out in March, as well as some of the initial positive impact from the economic reopening. (FYI, the latter point was evident in the CPI report as well.) 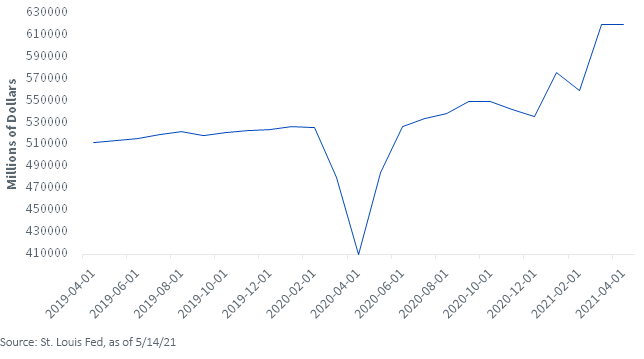 But does this mean consumer spending has stalled out? Not in our opinion—more than likely, it’s just a pause. In fact, investors may have to get used to some uneven monthly numbers over the next few months from a variety of economic indicators. Remember, we’re in uncharted territory here. What is undeniably most important is the dollar level of retail sales. As the graph clearly illustrates, consumer spending has more than exceeded where it was at pre-pandemic, as overall retail sales is now $94 billion, or 18% above its February 2020 tally.

You didn’t think I forgot about inflation, did you? Now to consumer sentiment. Unexpectedly, consumer confidence actually fell during the first half of May. However, it wasn’t due to a renewed bout of economic growth fears, but rather the direct result of higher inflation fears. Once again, investors witnessed inflation-related numbers that highlighted “decade or multi-decade” references.

I’m a big believer of not getting overly excited over one month’s worth of data. However, inflation fears have a way of sometimes becoming a self-fulfilling prophecy. In other words, if consumers are expecting higher inflation, they may adjust their spending habits accordingly. Against this backdrop, reports such as the upcoming CPI will more than likely take on a heightened importance and may have the potential to alter the bond market’s Federal Reserve (Fed) outlook. Stay tuned…