You are at:Home»Model Portfolio Channel»Investing in Chinese Tech: The Proverbial Risk/Reward Scenario 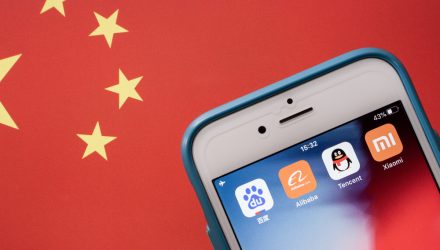 CXSE tracks Chinese companies that are not state-controlled. State-owned enterprises are defined as government ownership of more than 20% of outstanding shares of companies, according to WisdomTree.

With Beijing increasingly scrutinizing Chinese tech companies, investors need to do their homework.

“Chinese technology companies have been in the spotlight lately, and a few under-reported details stand out,” notes Liqian Ren, WisdomTree director of Modern Alpha. “When the Ant Financial IPO was delayed, speculation grew about how Chinese regulators would restrict the company. As expected, its financial services are going to be structured under the regulation of a financial holding company. One component that went unanswered is, what to do with Ant’s technology arm? In my view, it may be spun into a separate tech company that would improve its valuation.”

A Buying Opportunity for ‘CXSE’?

The Alibaba and Ant Group hoopla took a toll on CXSE, sending the exchange traded fund down almost 19% from its 52-week high.

“The biggest question for Ant and Alibaba in the next five years is whether they can  compete, grow and make money in a very competitive space for Chinese technology,” adds Ren. “The 34 companies on this list (facing regulatory scrutiny) show the challenges and opportunities, as Ant is still the top non-state-owned financial entity with the least competition from other non-state-owned enterprises, while Alibaba’s other main businesses have plenty of strong competitors.”

However, recent weakness in CXSE could prove to be a buying opportunity for long-term investors. Over longer holding periods, CXSE often tops traditional China benchmarks. In the past year, the WisdomTree ETF is higher by 60.71%, compared to a gain of 37.65% for the overall MSCI China Index.

Home to nearly $970 million in assets under management, CXSE allocates 54% of its combined weight to consumer discretionary and communication services stocks. The fund charges 0.32% per year, or $32 on a $10,000 stake.