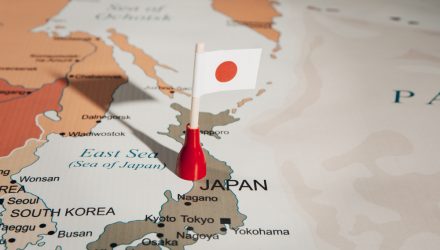 Bet on Buffett With This Japan ETF

Warren Buffett’s Berkshire Hathaway delivered fourth-quarter results over the weekend, and with that, the conglomerate included Buffett’s always highly anticipated letter to shareholders.

That letter updates investors on Berkshire’s equity holdings. While Buffett isn’t shy about extolling the virtues of the U.S. economy, he doesn’t confine his stock investments to the U.S. In fact, some of Berkshire’s biggest equity bets are on Japanese companies, several of which reside in well-known exchange traded funds such as the WisdomTree Japan Hedged Equity Fund (NYSEArca: DXJ).

In Buffett’s letter to Berkshire investors, it was revealed that Itochu Corp., Mitsubishi Corp., and Mitsui & Co. are all among the conglomerate’s top 15 equity positions. Each of those firms are members of the DXJ roster.

“We own stocks based upon our expectations about their long-term business performance and not because we view them as vehicles for timely market moves,” Buffett writes in the letter. “That point is crucial: Charlie (Munger) and I are not stock-pickers; we are business-pickers.”

At the end of 2021, Berkshire’s stakes in Itochu, Mitsubishe, and Mitsui amounted to 6% of each company. In dollar terms, Buffett’s company owned approximately a combined $7.6 billion worth of those stocks.

Those DXJ components “invest in overseas energy and metals assets, which benefited from a huge rebound in commodity prices and just posted record quarterly earnings,” reports Yun Li for CNBC.

There are other reasons to consider DXJ for adding international diversification to U.S.-heavy portfolios, including Japan being one of the most attractively valued ex-U.S. developed markets in the world and the potential for the dollar to strengthen as the Federal Reserve starts boosting interest rates. The central bank’s newest tightening cycle is widely expected to commence in March.

“The yen has been depreciating against the US dollar since the beginning of 2021, reversing four years of steady appreciation. The USD/JPY cross is currently trading at around 115. The rise in US long-term interest rates has been the main driver of the yen weakness over the past 12 months,” says Fitch Ratings.