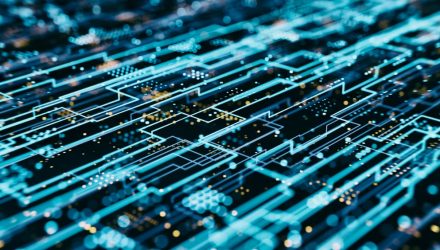 Balance Sheets to the Moon?

This is the first installment of our blog series on bitcoin’s growing demands.

Bitcoin has come under heavy scrutiny from the investment community. The fact that its price skyrocketed to $58,350 per bitcoin—almost three times higher than its 2017 peak—has attracted people’s attention.

A flurry of news signaling institutional investors and corporations’ adoption of the asset is fueling optimistic expectations for future demand. One of the most prominent examples is Tesla, which revealed a surprising $1.5B investment in bitcoin in early February.

In a series of three blogs posts, we will examine three potential sources of bitcoin demand: corporations investing in bitcoin as part of their corporate treasury, investment funds allocating capital to bitcoin and payment platforms accepting bitcoin as a possible payment. 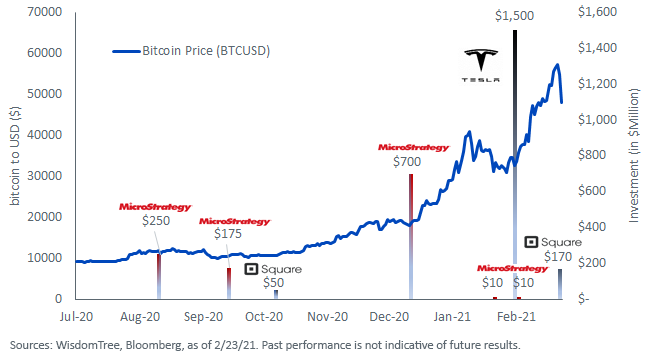 MicroStrategy is one of the first public companies to invest a significant portion of its corporate treasury in bitcoin, treating “bitcoin… as the primary treasury reserve asset.”[1]

Its aggressive allocations stem from CEO Michael Saylor’s bullish view on bitcoin, which he deems a superior investment to fiat money to store value.

Square invested $50M (4,709 BTC) in bitcoin on October 8, 2020. It completed a second purchase of $170M (3,318 BTC) on February 23, 2021. Together, Square’s bitcoin investments represent 18% of its cash and cash equivalents. The move was motivated by the company’s strategic plan to develop a bitcoin trading business, as well as the desire to “expand [its]largely USD-denominated balance sheet” in the low-yield and weakening-dollar environment.[3]

“We believe that allocating a part of a company balance sheet is a great way to market hedge, settlement hedge, [and]it is also a good PR campaign.”[4]

On February 8, 2021, Tesla announced its purchase of $1.5B of bitcoins in an SEC filing. The $1.5B purchase equates to approximately 8% of Tesla’s cash and cash equivalents. Tesla explains that it bought bitcoins to “diversify and maximize returns on our cash that is not required to maintain adequate operating liquidity.”[5]

Why Are Companies Getting Bitcoin Exposure on Their Balance Sheet?

The reasons for allocating a portion of corporate treasury to bitcoin are varied and debated, but there are two common factors driving these corporate purchases.

First, some companies—and especially tech companies—have piles of extra cash sitting on the balance sheet earning diminished returns in the current low-yield environment. Corporations are seeking alternatives to better invest their cash. Bitcoin, an asset historically uncorrelated to equities and bonds, not only has the potential to diversify a portfolio but also to generate significant returns. It appears that companies investing excess cash not required for operating liquidity have viewed taking on some volatility as warranted and invested a small portion to participate in the digital assets potential.

Second, most companies that invested in bitcoin have business models related to it. Online payment companies such as Square adopted bitcoin to complement Square’s bitcoin trading product (Cash App) and its blockchain technology teams (Square Crypto, Cryptocurrency Open Patent Alliance). It is a more natural decision when the company is already in the crypto space. Other examples include Tesla—it plans to accept bitcoin as payment to purchase products. Adding bitcoins to its balance sheet helps it build infrastructure to handle bitcoin transactions and to prepare for any accounting guidance changes.[6]

There are many companies that could potentially add bitcoin to their corporate treasury.

S&P 500 companies[7] are currently sitting on more than $1T in cash, a 20% increase compared to the average from 2013 to 2018. The highest cash level comes from Information Technology. In particular, the top five companies are Amazon, General Electric, Apple, Oracle and Alphabet.[8] Together they hold 16% of the total cash in the S&P 500, excluding Financials, Real Estates and Utilities. 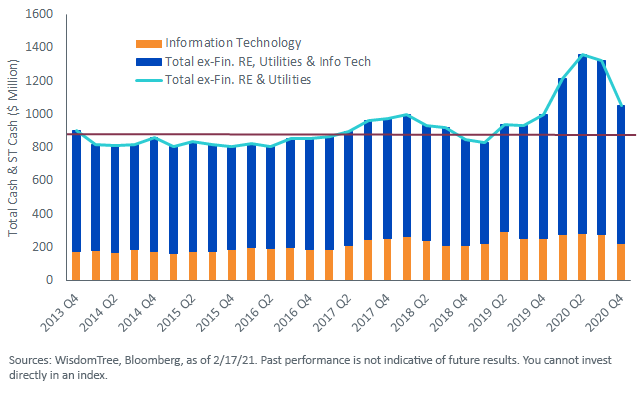 Tech companies with large amounts of cash are most open to making the switch, since bitcoins typically fit more naturally within their business profiles and can offer meaningful returns at the same time. Some of these tech companies could include:

To conclude, we are seeing encouraging signs of potential new demands coming from corporations. This trend might accelerate in the coming years as more and more companies start to offer crypto services or accept crypto payments. Although this was an unexpected new source of demand for bitcoin for many outside observers, it has the potential to become significant.

In the next blog post of this series, we will discuss a second important source of demand for the asset class—adoption in the investment management industry.

1 https://www.microstrategy.com/content/dam/website-assets/collateral/financial-documents/financial-document-archive/Form%208K%20-%20Sep%2014,%202020.pdf
2 On February 8, 2021, 71,079 bitcoins were valued at a market price of $44,691.
3 https://images.ctfassets.net/2d5q1td6cyxq/5sXNrlEh2mEnTvvhgtYOm2/737bcfdc15e2a1c3cbd9b9451710ce54/Square_Inc._Bitcoin_Investment_Whitepaper.pdf
4 Frank Chaparro, “Crypto market maker B2C2 is pushing Japan’s biggest trading houses to buy bitcoin,” The Block, 11/12/20. https://www.theblockcrypto.com/daily/84416/b2c2-japan-trading-houses-bitcoin-sbi
5 Frank Chaparro and Ryan Weeks, “Crypto exchange Coinbase was behind Tesla’s bitcoin buy,” The Block, 2/17/21. https://www.theblockcrypto.com/post/95146/coinbase-tesla-bitcoin-buy
6 There is currently no clear guidance on how to record digital assets in financial statements. Changes to the existing accounting framework will likely occur as more and more investors invest in bitcoin.
7 Excluding Financials, Real Estates and Utilities.
8 WisdomTree, Bloomberg, as of 2/17/21.
9 https://www.coindesk.com/airbnbs-ipo-prospectus-says-firm-may-consider-crypto-and-blockchain

Bitcoin operates as a decentralized, peer-to-peer financial exchange and value storage that is used like money. Bitcoin operates without central authority or banks and is not back by any government.  Bitcoin generally experience very high volatility. Bitcoin is also not legal tender. Federal, state or foreign governments may restrict the use and exchange of cryptocurrency, and regulation in the U.S. is still developing. Bitcoin exchanges may stop operating or permanently shut down due to fraud, technical glitches, hackers or malware.

This material represents an assessment of the market environment at a specific time and is not intended to be a forecast of future events or a guarantee of future results. This material should not be relied upon as research or investment advice regarding any security in particular. The user of this information assumes the entire risk of any use made of the information provided herein. Unless expressly stated otherwise, the opinions, interpretations or findings expressed