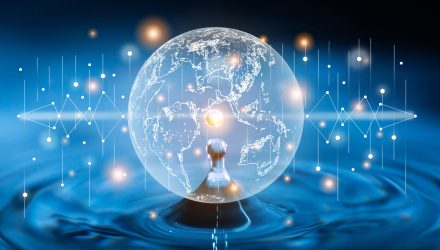 A Guide to the WisdomTree Rebalance Making Waves in EM

Emerging market investors took notice recently when unexpected outflows were seen coming from several Chinese companies. A WisdomTree rebalance of its ex-state-owned-enterprise indexes with exposure to China on Thursday, October 20, resulted in the company dropping Tencent, Baidu, and Weibo from the ex-SOE indexes in a move that caught the attention of many.

The two funds that rebalanced at the end of last week resulting in the changes were the WisdomTree  Emerging Markets ex-State-Owned Enterprises Fund (XSOE) — China is roughly one-third of the index — and the WisdomTree China ex-State-Owned Enterprises Fund (CXSE). Both funds seek to avoid exposure to companies that could be heavily influenced by their local governments, generally shown to have meaningful impacts on a company’s bottom line.

The exclusion of these companies is based on the ESG screen that the funds use based on data from Sustainalytics, a Morningstar company. Liqian Ren, director of modern alpha at WisdomTree, cites the companies’ “involvement in severe violations of freedom of expression in China” as the cause for being downgraded from watchlist to non-compliant and therefore dropped, in a blog post explaining the moves. The ESG screen requires adherence to UN Global Compact Principles for any company within the index and Tencent, Baidu, and Weibo no longer met the specifications for inclusion as of rebalance.

“One of the things we want to emphasize — we are using Sustainalytics data for the compliance with the United Nations global compact principles, and the determination by Sustainalytics that these companies were non-compliant that caused the removal of Tencent, Baidu, and Weibo,” explained Jeremy Schwartz, global CIO of WisdomTree, in a communication to VettaFi.

The rebalance and dropping of Tencent, Baidu, and Weibo resulted in a 28% turnover for the indexes as well as changing the sector exposures, with a smaller weight to communication services post-rebalance. 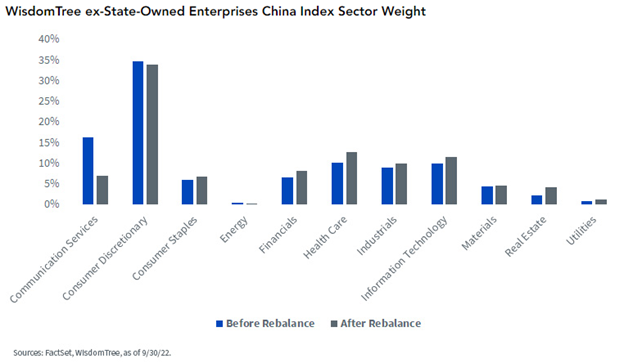 “Something we would also emphasize is that these changes occurred on Thursday last week, ahead of the Communist Party Congress — and were not in connection with that but just so happened that our annual rebalance occurred around the same time,” Schwartz said.

Investing in Ex-State-Owned-Enterprises with WisdomTree

WisdomTree offers several options for investors that wish to limit their exposure to companies in emerging markets that might be significantly government-owned, or limit China exposure while also screening for adherence to UN Global Compact Principles.