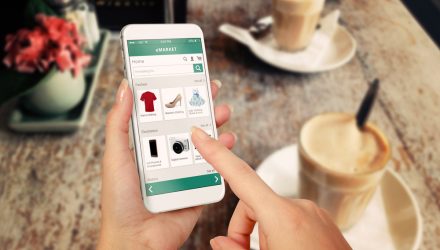 Americans love their mobile phones, and the evolution of the smartphone only enhanced that adulation. The smarter smartphones get, the more everyday tasks can be performed in mobile fashion.

There is an intersection between EMQQ and mobile consumer trends, and that relationship is only expected to get more cozy over the long term.

“The majority of consumers from emerging markets are predominantly making online purchases through smartphones rather than by means of the fixed-line-based internet, due to the fact that in regions which include Asia Pacific, Latin America and Africa, mobile handsets are the first web-enabled device the majority of the populations have access to,” according to a PayU study. “Already fully established e-commerce markets may have much higher mobile device counts and internet access, however, consumers in developing countries make greater use of smartphones to shop compared to their wealthier counterparts.”

Mobile commerce is popular in tech-savvy developing economies, such as China and South Korea, which combine for 68.5% of EMQQ’s weight. Another nifty element of emerging markets consumers embracing online retail via mobile devices is that the trend can pave the way for increasing social commerce opportunities.

In the U.S., consumers and investors think of social commerce — a still-emerging concept — as the interaction of social media platforms like Twitter and online retail. It’s essentially the same in other countries, and China is already becoming a leader in this arena.

Plus, there’s potential upside to be had with EMQQ because internet and smartphone penetration in emerging markets is still low relative to developed economies.

“According to the survey conducted by Credit Suisse, if internet usage across the developing countries reaches the levels found in developed countries, this would result in an additional one billion internet users in the nine countries surveyed, with India and China likely to have the largest number of prospective consumers to this projection,” adds PayU. “At the time the survey was conducted, two-thirds of the internet access was through smartphones in India, and close to three-fifths in China. This indicates the importance of having a well-thought-out mobile commerce strategy for companies planning to benefit from the ongoing e-commerce boom in emerging markets.”