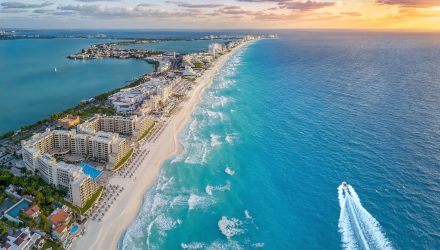 Mexico’s markets strengthened after the elections, but the momentum in the country-specific ETF stalled as economic activity weakened over the second quarter.

The iShares MSCI Mexico Capped ETF (NYSEArca: EWW), the largest exchange traded fund dedicated to Mexican equities, was stuck within range in recent weeks, rising 0.5% over the month. EWW is still up 4.9% year-to-date.

Mexico’s national statistics institute revealed gross domestic product slipped a slightly worse-than-expected 0.2% quarter-over-quarter, compared to the preliminary estimates of a 0.1% contraction and a 1% expansion over the first quarter, Bloomberg reports.

Economy is Still Expected to Grow

The economy is still expected to grow faster than in 2017 on rising spending that preceded the July 1 election, but the road ahead may be bumpy. The International Monetary Fund last month cut its forecast for the emerging Latin country’s 2019 growth, pointing to trade tensions, uncertainty over the North American Free Trade Agreement and the new president’s agenda.

Specifically, Andres Manuel Lopez Obrador fanned concerns after stating he would hold a public referendum on whether to cancel construction of a $13 billion international airport for Mexico City, arguing that cost and corruption surrounding the project may not be worth the trouble.