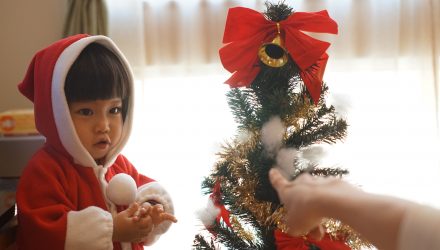 Christmas as a holiday in Japan is viewed more through a commercial lens as opposed to a religious one, but the latest global concerns have Japanese yen ETFs praying for more gains as investors flee to the currency as a safe haven option.

Fueling the flight to safe-haven assets like the Japanese yen is the known unknown—the ongoing trade war between the United States and China—a trigger event that could tip the scales for global markets. With negotiations in full swing between the world’s two largest economies, investors positioning themselves for the worst have looked to the Japanese yen to escape from volatility and more potential damage if the trade war negotiations don’t bear fruit in the form of a permanent deal.

“The risk is that much worse is to come. Global investors and deal makers have largely overlooked the acceleration of trade tensions between the US and China, and to a lesser degree, between the US and a range of other economies,” said law firm Baker McKenzie. “But the global consensus that trade disputes should be handled via the multilateral framework has clearly broken down, and there is a risk of a damaging spiral into protectionism.”

The U.S. Federal Reserve will be deciding on interest rates this week with a majority of the capital markets anticipating another rate hike of 25 basis points. However, an increasingly dovish Fed that portends to any signs of pumping the brakes on their rate-hiking policy could give the green light to investors to seek more safe-haven assets like the Japanese yen.

As Christmas approaches, investors are looking for any gifts after a heavy dose of volatile sessions in U.S. equities, which has the Dow Jones Industrial Average down over 5 percent within the past month. If the news-fueled U.S. stock markets experience any more slides into the red, expect more outbound capital from U.S. equities heading towards Japanese yen.