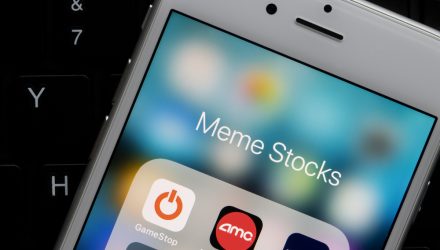 Meme Stocks Are a Big Influence on Small-Cap ETFs

The rally in meme stocks this year has distorted gains in small-capitalization category-related exchange traded funds.

In comparison, when looking at the large-capitalization segment, the S&P 500 Growth Index is outperforming its value peer by about six percentage points so far this year.

The disparity between performances in the small-cap category may be partially attributed to the run-up in meme stocks like AMC Entertainment Holdings Inc. (AMC) and GameStop Corp. (GME). AMC alone surged over 2,000% so far this year, lifting the Russell 2000 Value Index, while the Russell 2000 Growth Index was left in the dust. The two benchmarks are now trading at their widest margin since 2002, the Wall Street Journal reports.

GameStop, which enjoyed a meme rally as a group of individual traders caused a short squeeze in the company stock, was dropped from the Russell 2000 Value Index in June after enjoying outsized gains. Despite its recent exclusion from the benchmark, the company still remains the second-biggest contributor to the Russell 2000 Value Index’s gains this year. AMC remains the undisputed champion contributor, according to AJOVista data.

AMC currently makes up 1.45% of IWN’s underlying portfolio and about 0.70% of IWM’s holdings, or more than two times the next largest component in both ETF’s portfolios.

Some market observers have questioned AMC’s placement in a value index after shares of the company surged and now appear pricey relative to their fundamentals.

“It doesn’t make sense,” Chris Covington, head of investments at AJOVista, told the WSJ. “It’s really all a nuance of the index construction process.”

According to FTSE Russell, the index provider, the value index is designed to include companies with lower price-to-book ratios and lower expected growth in the future. The index is updated annually.

“It is representative of market demand,” Stephanie Hill, head of index at Mellon, told the WSJ, explaining the meme stocks’ growing influence on the benchmarks.