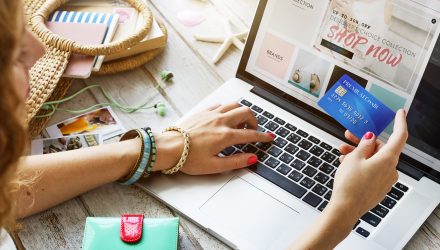 Invest in Millennial Shoppers (Sort Of) With NBCC

Millennial shoppers are digital buyers, with most consumers from this generation (86%) making purchases online, and 67% preferring to shop online rather than in-store, according to Invesp. Not only do Millennials like to shop online, but they also prefer to shop on the go. Nearly half of Millennials (42%) complete online purchases using their smartphone.

Plus, Millennials have now surpassed Baby Boomers as the largest adult generation living in the U.S. Data from the U.S. Census Bureau show that Millennials numbered 72.1 million as of July 1, 2019, while Boomers numbered 71.6 million. On average, Millennials spend around $47,000 a year, with the highest ticket items for spending including rent/housing, eating out, and apparel and services.

“The consumer still drives the market,” said John Aguilar, senior vice president of U.S. intermediary marketing at Neuberger Berman. “Gen Z and Gen Y tend to be bellwethers for the next trend.”

Over the coming 15 years, the digitally native cohort totaling 3.5 billion people is expected to grow its spending by 29% to 54%, and to represent 81% of total global disposable income by 2050. Investors looking to invest in companies that could benefit from Generations Y and Z being the dominant consumers may want to check out the Neuberger Berman Connected Consumer ETF (NYSE Arca: NBCC).

The fund targets companies that demonstrate significant growth potential from connectivity-based consumerism. Neuberger Berman’s data science capabilities will be used to evaluate the web search and spending tendencies of millions of consumers, and the call transcripts and filings of over 4,000 public companies daily to identify the opportunities that appear best positioned for mass adoption in the digital age.

“We analyze six terabytes of data per day to identify the next Facebook before it’s Facebook,” Aguilar added.

Launched in April, NBCC spans a broad range of industries globally and may invest in companies of any market cap. The team will evaluate the web search and spending tendencies of millions of consumers and the daily call transcripts and filings of over 4,000 public companies to identify the best opportunities for mass adoption in the digital age.

For more news, information, and strategy, visit the Megatrends Channel.