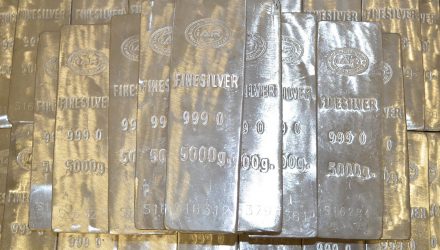 Heading into 2019, one of the commodities many market observers expected to perform well was silver. The year is still young, but the iShares Silver Trust (NYSEArca: SLV) is up more than 1%, which could be a sign of more upside to come for the white metal.

A more accomodative Federal Reserve would bolster the case for silver. Looking ahead, silver and other precious metals may continue to face an uphill struggle as the Federal Reserve is expected to keep hiking interest rates, which makes non-yielding assets like commodities less attractive.

“Mike McGlone, senior commodity strategist at Bloomberg Intelligence, said that continued financial market volatility and a weaker U.S. dollar should continue to support silver prices,” reports Kitco News. “In a report Wednesday, McGlone described silver’s weakness in the second half of last year as a “failed bear-market raid.” However, he added silver’s resilience in the face of extreme weakness could mark a long-term bottom for the precious metal as buying momentum picks up.”

Potential weakness in global manufacturing has been a particular worrying development for the silver market. While silver is classified as a precious metal, it is still used in a range of industrial applications from electronics to jet-engine manufacturing, which makes the metal sensitive to global economic trends, the Wall Street Journal reported.

Over the past 10 years, only one ETF has been positive in January more frequently than SLV and the silver ETF has been the best-performing commodity in the first month of the year over those 10 years.

McGlone “added that the critical level investors should keep an eye is $16.35 an ounce, which represents a long-term resistance level. His comments come as March silver futures last traded at $15.785 an ounce, up 0.46% on the day,” according to Kitco.