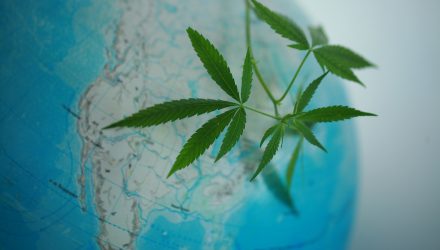 The ETFMG Alternative Harvest ETF (NYSEArca: MJ) gained as much as 2 percent on Tuesday after one of its holdings, Tilray Inc, recently announced a partnership with pharmaceutical giant Novartis AG to facilitate global supply and distribution for medical marijuana.

Tilray surged close to 20 percent in Tuesday’s trading session following the announcement, while Novartis was down slightly at 0.4 percent. Following investments from big-name tobacco and beverage companies into Canadian marijuana companies, this latest partnership helps to add a veil of legitimacy to the nascent, but growing marijuana industry.

“Around the world, people are substituting medical cannabis for traditional pharmaceutical products,” said Tilray Chief Executive Brendan Kennedy. “Medical cannabis is disrupting Big Pharma, and Sandoz and Novartis are smart for being ahead.”

According to Kennedy, the partnership is the first of its kind that features a collaborative agreement with a major pharmaceutical company and a cannabis company. The partnership with Novartis AG will build upon its current agreement with its subsidiary company Sanoz to expand its market share exposure to 35 countries with medical marijuana legislation in place.

“The key point is that it will allow us to expand into more markets, more quickly,” Kennedy said. “This is an agreement that will take advantage of Sandoz’s global footprint and leverage their brand, which inspires trust and confidence with pharmacists around the world. Also, we can use their salesforce to educate physicians and pharmacists around the world — which can be a challenge.”

MJ reached a high of over $40 per share in September before the latest U.S. equities sell-offs tamped down its gains to its current price of $26.57 as of 2:15 p.m. ET.