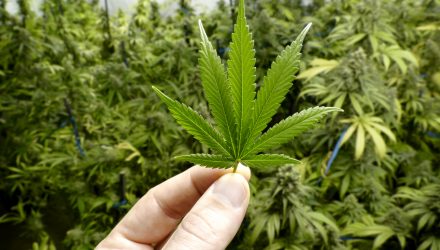 The ETFMG Alternative Harvest ETF (NYSEArca: MJ), the only dedicated marijuana exchange traded fund listed in the U.S., rallied again Monday on news that soft-drink Coca-Cola Co. (NYSE: KO) is interested in partnering with a company that is a major MJ holding to make weed-infused drinks.

Shares of Aurora Cannabis, a Canadian weed producer and a top five holding in MJ, surged Monday on news Dow component Coca-Cola is in talks with the company.

Shares of Aurora “rallied more than 12 percent in early Canadian trading Monday after Canadian news service BNN Bloomberg reported Coca-Cola is in talks with Aurora to develop weed-infused beverages. Any partnership between the two would likely develop health-focused beverages aimed at easing inflammation, pain and cramping, the report said,” according to CNBC.

MJ seeks to provide investment results correspond generally to the total return performance of the Prime Alternative Harvest Index, which s concentrated in the pharmaceuticals and tobacco industries.

Last month, MJ was one of the best-performing non-leveraged ETFs in the U.S. and the fund is extending that strength in September. The fund is higher by more than 6% over the past week and investors have been flocking to the ETF. Recently, investors added $100 million to the fund in just one week.

Many are betting on the continued growth of the cannabis industry as governments loosen controls over marijuana. For instance, beer maker Constellation Brands recently invested C$5 billion, or $3.8 billion, in Canopy Growth Corp., Denver Post reports.