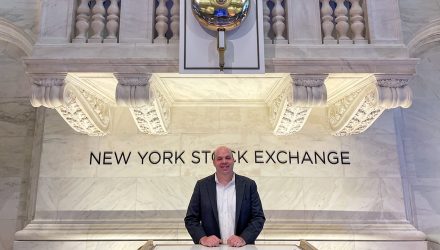 As we wrap up 2022, it is no surprise to see iShares, Vanguard, and State Street Global Advisors topping the ETFs leaderboard in terms of flows, as the three firms manage nearly 80% of the industry’s assets. The Vanguard S&P 500 ETF (VOO) was the most popular with $39 billion as of December 16, with the iShares Core S&P 500 ETF (IVV) and the Vanguard Total Stock Market ETF (VTI) not far behind. However, for State Street Global Advisors, it was not an equity ETF peer that gathered the most money, but rather the SPDR Bloomberg 1-3 Month T-Bill ETF (BIL), a less interest rate-sensitive fixed income offering. Yet, many products from firms outside of the industry’s big three had breakout years. Let’s review five of them.

The Schwab US Dividend Equity ETF (SCHD) is a $44 billion dividend strategy that has pulled in $15 billion thus far in 2022 as advisors and investors have sought out stable income in a volatile, rising rate environment. SCHD charges a miniscule 0.06% expense ratio and consists of high-quality, long-term, dividend-paying companies like Cisco Systems, Home Depot, and Merck. The ETF was down only 4.2%, significantly outperforming the 18% loss for the popular S&P 500 Index ETFs.

The JP Morgan Equity Premium Income ETF (JEPI) is a $17 billion covered-call strategy that pulled in $12 billion in 2022. JEPI is actively managed, unlike most popular ETFs, but advisors found its defensive equity approach and its fee of 0.35% appealing. JEPI was down 3.9%, similarly crushing the broader market funds, due to its focus on lower-risk equities like AbbVie, Hershey, and Progressive, and the income benefits pairing the positions with options.

The Pacer US Cash Cows 100 ETF (COWZ) has long been a cute ticker for many, but in 2022 it became one of the industry’s breakout stars. COWZ is a $11 billion ETF thanks to $10 billion of net inflows in 2022 as advisors and others turned to free cash flow-generating companies amid the uncertainty. Companies with strong free cash like Dow, Exxon Mobil, and Moderna have the ability to pay dividends, repurchase shares, or just remain strong if there’s a recession. COWZ was up 0.2% as of mid-December, obliterating the broader index funds, despite a 0.49% expense ratio.

The Invesco S&P 500 Equal Weight ETF (RSP) is larger than the others listed above, with $33 billion in assets, but the $5 billion of net inflows, much coming in November, is still notable. RSP owns the same stocks as IVV and VOO, but moderately sized companies like Biogen, PG&E, and Wynn Resorts can rise to be top-10 holdings ahead of Apple, Microsoft, and Tesla when they are relatively strong performers, as each position starts at 0.20% at rebalance. In a year when the mega-caps did not drive the market, RSP’s 12% loss looks relatively strong. RSP charges a 0.20% expense ratio.

We are going to skip past many other popular ETFs to highlight the iMGP DBI Managed Futures Strategy ETF (DMBF), since it is rare to find an ETF in its third year gathering approximately $1 billion of new money in the current year and still holding $1 billion. DMBF’s unicorn status stems from its whopping 20% year-to-date return and managed futures becoming a strong alternative to the long-only equity and fixed income ETFs that have lost money this year. DBMF uses derivatives across commodities, currencies, equities, and fixed income with both long and short futures positions.

As rates rose in the third quarter, DBMF made money per the fund’s website from short positions in Treasuries, short positions in the euro and yen that added to prior gains as the dollar strengthened, and short positions in non-U.S. developed and emerging markets. While DMBF is the most expensive of the five ETFs highlighted, with a fee of 0.85%, the cost is relatively low for a hedge fund-like investment.

As the second-best year of flows for ETFs, 2022 has been a year to remember for many firms seeking to climb the leaderboard.