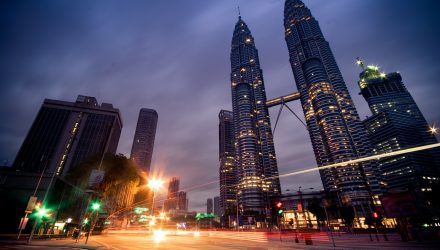 The Malaysia country-specific exchange traded fund has experienced wild swings in the last couple of sessions and allowed U.S. investors to price this Southeast emerging market even during this foreign market’s off hours.

The iShares MSCI Malaysia ETF (NYSEArca: EWM) jumped as much as 4% in earlier Thursday trading after plummeted 6% Wednesday, and it is now testing its long-term support at the 200-day simple moving average.

The Malaysia ETF reveals the strong U.S. trader interest in international stocks as many look to capture potential overseas opportunities.