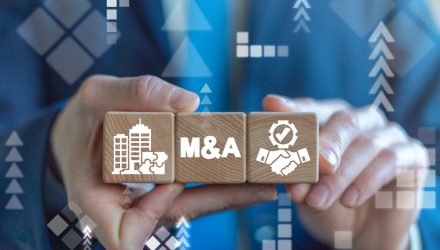 Nielsen postponed a shareholder vote on Tuesday over a buyout as a consortium of private equity firms, led by Elliott Management Corp and Brookfield Asset Management inc., push to complete a deal with WindAcre Partnership LLC, according to a press release.

The TV ratings company previously agreed to sell to Elliott and Brookfield in March, but WindAcre, which held a 27% position in the company, opposed the deal in April, arguing that the price was undervalued, the Wall Street Journal reported.

On Tuesday, Elliott and Brookfield may have reached a tentative agreement with WindAcre, offering $28 per share for WindAcre’s position.

Meanwhile, Nielsen pushed off its special shareholder meeting to account for the potential completion of the WindAcre deal.

Nielsen shares were trading around $27.5 per share on Tuesday.

As a way to tap into the merger arbitrage strategy, investors can look to the IQ Merger Arbitrage ETF (MNA), which employs a type of alternative, “directional hedge fund strategy” called merger arbitrage, where the fund tries to capture the spread between a stock’s trading price before a deal is announced and its eventual takeover price.

A merger arbitrage strategy may also help improve portfolio diversification. Merger arbitrage returns have not historically been materially influenced by the broader equity and fixed income markets, as demonstrated by the low correlation to broad market indexes.