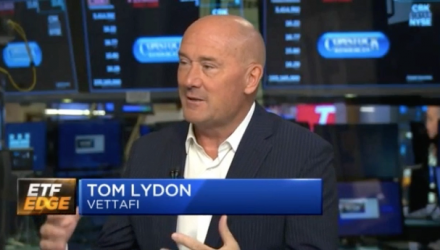 VettaFi vice chairman Tom Lydon appeared on CNBC’s ETF Edge along with S&P Down Jones Indices Anu Ganti and host Bob Pisanti. Active management has traditionally underperformed compared to passive management – but this year is different. A new study indicates that 49% of active managers are currently outperforming the benchmark, the best performance active has had since 2009.

Pisanti noted that, on average, 68% of active managers underperform their benchmarks. Asking Lydon what he thinks about all of this, Lydon said, “it is good news for the ETF space,” and noted that several new active managers are arriving on the scene, including firms like Matthews Asia and Neuberger Berman. Lydon continued, “it is really tough to beat the S&P 500, especially when the markets are doing well.”

Ganti said, “it is interesting to think about sectors in this environment,” alluding to energy’s spectacular performance.

Given how little of the S&P 500 is exposed to energy – roughly 4%, Lydon wonders why there aren’t even more asset managers who were able to find opportunities and perform even better. Lydon said, “I think there’s too much sector hugging, which is impeding the ability of advisors and managers to beat their benchmarks.”

Looking at a 20-year time span, Pisani observed that a whopping 95% of active managers fall short of the benchmark. Pisani brought up a 2019 study that said, “the persistence of fund performance was worse than would be expected for luck.”

“The big question is, how can so many managers still have poor performance and still garner assets,” Lydon said, noting that fees – though they can hurt performance, can help a fund by, “putting feet on the ground and putting a bunch of ads all over the place.” ETFs are also still an outsider when it comes to 401Ks. “75% of every new dollar going into fidelity funds goes into 401K plans.”

Ganti also underlined the importance of survivorship bias. As funds are liquidated or merged, they become easier to discount or forget. They also get removed from indices. “We think it’s important to look at that entire opportunity set so you eliminate that bias,” Ganti said.

Stock forecasting is, according to Pisanti, “an impossible job,” given the number of variables and unknowns out there. A myriad of circumstances could impact the markets in numerous ways. Growth managers, in particular, have struggled in the first half of 2022, with 79% of large-cap fund managers underperforming and 84% of mid-cap fund managers.

Lydon thinks it can certainly seem easier to have done well this year, noting “all you had to do is have some high conviction and play a little bit of defense. Push more to cash, push some into utilities and energy.” Lydon thinks that young advisors have time on their hands. If they can avoid trying to be a “stock jockey,” there are some great benchmarks out there. “Plain vanilla S&P 500, over time, does really, really well,” Lydon said, continuing, “use this time to have the long-term market outlook work for you.”