You are at:Home»Video»Lydon on CNBC: Long-Term Trend Lines Clearly in Place 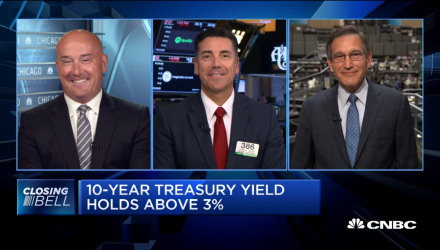 In the CNBC segment, Lydon discussed the current state of the markets alongside Steve Grasso of Stuart Frankel and CNBC’s Rick Santelli.

“We’ve seen a lot of volatility and we’ve seen concern about technology stocks, the Nasdaq Composite is still above its 200-day average and it’s still above the February 8 low,” Lydon said. “Even though mutual fund flows are in the negative, we’ve actually seen $128 billion in new money come into equity ETFs. Looking at those long-term trend lines are really important. Earnings are driving this whole thing, although they aren’t getting a lot of love right now, but those long-term trend lines are clearly in place.”

The Dow rose 59.70 points on Wednesday, or 0.2 percent, at 24,083.83. A big gain in Boeing pushed the Dow Jones industrial average higher, breaking a five-day losing streak.