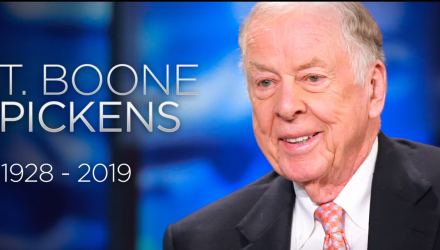 A Look Back on the Life of T. Boone Pickens

Legendary oil man T. Boone Pickens died Wednesday peacefully at his home in Texas at the age of 91.

To many, he was known as the corporate takeover raider from Amarillo, Texas. To friends, he was just Boone. But to everyone he was a master of reinvention, both personally and professionally.

Born in Oklahoma in 1928, Thomas Boone Pickens was a businessman from the start.

He graduated from Oklahoma State University with a degree in Geology and went to work for Phillips Petroleum, but the corporate life was not for him.

Before long, he started his own company Mesa Petroleum with just $2,500.

Pickens spent years out in the desert personally drilling for oil and buying up land, collecting valuable assets. He took Mesa public in 1964 and quickly realized what the power of stock can do.

Turning from geology to corporate finance, Pickens became one of the first so-called corporate raiders. He unsuccessfully launched takeover bids for Gulf Oil, Phillips Petroleum and Unical, creating a playbook though that would be followed by many others over the next few decades.

Take a small stake in a company, pressure it to sell itself and become very rich in the process.

Despite his reputation as a ‘stock holding swashbuckler,’ Pickens was also an early advocate for shareholder rights, insisting that executives be compensated with stock.

“Now remember the stock owner owns a company and management is the employee,” Boone once said.

That line of thinking informed a new generation of shareholder activists.

In 1997 at the age of 68, Pickens started his investment firm BP Capital, one of the first energy focused hedge funds. It was a nearly total flop at first, but a huge bet on natural gas in the year 2000 proved prescient and set off a run to a billion dollar fortune.

In July 2008, he self-funded a $100 million campaign aimed at making America energy independent.

“We haven’t done a thing to lower our dependency on foreign oil,” he said at the time.

Though the Pickens plan never reached the scale he wanted, Pickens has been instrumental in creating a line of natural gas-powered vehicles and a company called clean energy fuels.

For Pickens, philanthropy became as important as profit. He donated $500 million to his Alma mater, with a football team now plays in Boone Pickens Stadium, but his greatest love was the 65,000 acre ranch he owned in the Texas Panhandle – he even bought and moved his childhood home from Oklahoma onto the ranch and started to drill a new oil well there in 2018.

Plans for memorial services in Dallas, TX, and Stillwater, OK, are pending. He is survived by his five children — Deborah Pickens Stovall, Pam Pickens Grace, Michael Pickens, Tom Pickens and Liz Pickens Cordia— and 11 grandchildren and an increasing number of great-grandchildren.