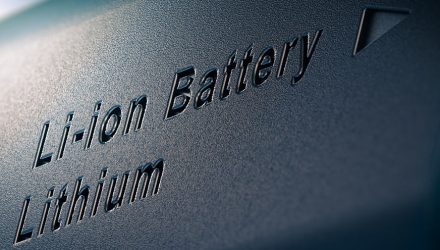 Already one of this year’s best-performing non-leveraged exchange traded funds, the Global X Lithium ETF (NYSEArca: LIT) got a significant boost Monday when it gained about 5%, pushing its year-to-date gain to around 46%.

Data continue to support surging lithium demand, a thesis pivotal to LIT’s fortunes. LIT, the only equity-based ETF on the market dedicated to lithium miners and producers, tracks a diversified group of companies involved in the “full lithium cycle,” from mining and refining the metal through battery production. Lithium is utilized in batteries for their high charge density, or longer lasting life.

The excitement over lithium demand is prompting investors to pour into LIT at a rapid clip. As of Sept. 8th, LIT had over $441 million in assets under management, well above where the ETF was to start 2017.

“Last week, investors poured $41 million into Global X Lithium, which trades under the ticker LIT, putting it on course for a sixth straight monthly inflow. The exchange traded fund, which delivered a 41 percent return this year, more than tripled its assets to $441 million,” reports Luzi-Ann Javier for Bloomberg.

Lithium is “An essential component in the advancement of alternative energy is the ability to efficiently store power,” according to Global X. ” Renewable energy sources such as solar and wind require generated electricity to be stored because they provide power inconsistently throughout the day. Overhauling the transportation industry to run on electricity, rather than gasoline, requires enough energy storage to power vehicles for hundreds of miles. To meet these energy storage demands, advanced batteries are made from Lithium.”