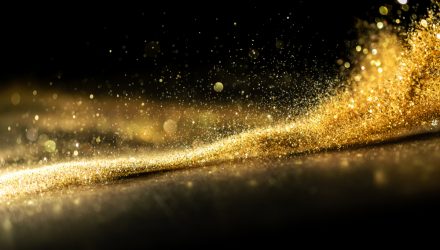 Taper tantrum has been a common phrase in the capital markets lately.

“The phrase, taper tantrum, describes the 2013 surge in U.S. Treasury yields, resulting from the Federal Reserve’s (Fed) announcement of future tapering of its policy of quantitative easing,” Investopedia explained. “The Fed announced that it would be reducing the pace of its purchases of Treasury bonds, to reduce the amount of money it was feeding into the economy. The ensuing rise in bond yields in reaction to the announcement was referred to as a taper tantrum in financial media.”

In the meantime, investors are still fretting over rates.

“There’s growing nervousness about rising inflation and the feeling in precious metal markets is that central banks have to start to respond a bit more aggressively to these inflationary pressures,” said ED&F Man Capital Markets analyst Edward Meir.

DUST seeks daily investment results before fees and expenses of 200% of the inverse of the daily performance of the NYSE Arca Gold Miners Index. The fund invests in swap agreements, futures contracts, short positions, or other financial instruments that, in combination, provide inverse or short leveraged exposure to the index equal to at least 80% of the fund’s net assets.

The index is a modified market capitalization weighted index comprised of publicly traded companies that operate globally in both developed and emerging markets, and are involved primarily in mining for gold and, to a lesser extent, silver.

A Stronger Dollar Could Be Positive for DUST

A stronger dollar has been putting additional downward pressure on gold prices. Of course, should the Fed begin to raise rates in response to inflation, that should provide further tailwinds for gold.