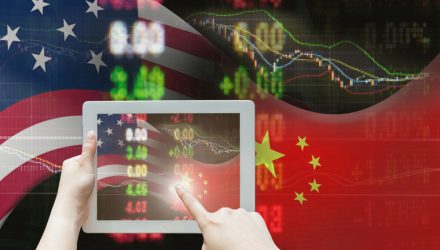 With global inflation priced in and the worst seemingly over, internet stocks could be back in full force, including companies from China. However, the introduction of regulatory measures could stifle a recent rally.

Along with the downward pressure of the Evergrande Crisis in 2021, crackdowns on big tech were imposed by the Chinese government last year to curb monopolistic activity. Despite inflation fears in 2022 putting further selling pressure on big tech, a recent rally has been brewing with the hope that global inflation and rising rates were already priced into big tech’s downfall.

“Last year Alibaba Group Holding and other Chinese technology stocks suffered severely while their U.S. counterparts enjoyed gains of historic proportions. In 2022, the tide has turned,” a Barron’s report noted.

Now, it appears fines are being rained down on big tech once again, which could pare down gains accumulated in the rally. The biggest names in China’s big tech took them on the chin, but this could prove to just be a temporary speed bump.

Per a CNN Business report, “the State Administration for Market Regulation said it had fined a number of technology companies for violating anti-monopoly rules on the disclosure of transactions. The watchdog released a list of 28 mergers and acquisitions involving Tencent, Alibaba, Bilibili, Sina Weibo, Lenovo’s parent company Legend Holdings, and Ping An Health that it said had not been reported to the regulator.”

Bullishness on the Way?

If China’s big tech companies can slough off the impact of the fines, then bullishness could be on the horizon once again. In order to prop up China’s economy, it will need big tech to thrive, which represents a sizeable portion of its economy.

“Top government officials had recently signaled an easing of President Xi Jinping’s bruising tech crackdown and pledged support for the internet sector,” a CNN Business report said further. “The change in rhetoric fueled hopes that Beijing would support the private sector in helping to rescue growth at a time when China’s economic outlook is weak.”

Leverage-seeking traders can play impending bullishness using the Direxion Daily CSI China Internet Bull 2X Shares (CWEB). CWEB seeks daily investment results equal to 200% of the daily performance of the CSI Overseas China Internet Index, which is designed to measure the performance of the investable universe of publicly traded China-based companies whose primary business or businesses are in the Internet and Internet-related sectors.