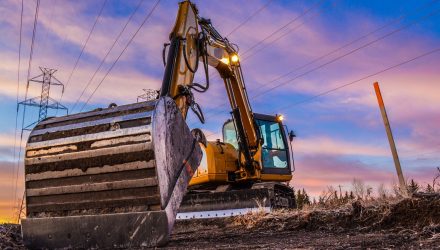 Equipment manufacturer Caterpillar reported better-than-expected first-quarter earnings on Wednesday, which could inspire homebuilder exchange-traded funds (ETFs) in what’s been a challenging environment for housing the past year.

The Federal Reserve was unflinching in its rate-hiking policy in 2018 with four straight increases in the federal funds rate. This, in turn, increased lending costs for prospective homebuyers who were already facing the pangs of rising prices.

However, is Caterpillar’s strong first-quarter earnings a sign that the housing market comeback may be in its early stages?

“That reflects the strong construction activity, as state and local infrastructure builds are still going up,” said Andrew Bonfield, Caterpillar’s financial chief, in an interview. “North America seems to be going very well.”

“Builders report solid demand for new single-family homes, but they are also grappling with affordability concerns stemming from a chronic shortage of construction workers and buildable lots,” said NAHB Chairman Greg Ugalde, a homebuilder and developer from Torrington, Connecticut.

Last month, the central bank decided to keep interest rates unchanged. In move that was widely anticipated by most market experts, the Federal Reserve elected to keep rates unchanged, holding its policy rate in a range between 2.25 percent and 2.5 percent. In addition, the central bank alluded to no more rate hikes for the rest of 2019 after initially forecasting two.

Once again, however, the rising costs of supplies could keep home prices rising, but that could be tempered if the current labor market remains robust.