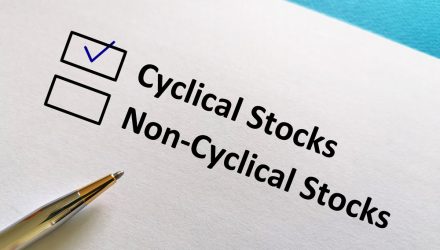 WANT to Go Big on Cyclicals? This Leveraged ETF Ups the Ante

With vaccine rollouts and healthy injection of stimulus capital, consumers appear ready to open up their wallets again. This propensity to spend is putting leveraged assets like the Direxion Daily Consumer Discretionary Bull 3X ETF (WANT) in play.

While the retail space is one way traders can play the re-opening, consumer discretionary is also an option.

“At the same time, seasoned investors could also be looking towards this industry as well,” an Entrepreneur article said. “Namely, this would be because of the ever-growing list of signs pointing towards broader economic recovery now. Earlier today, it was announced that U.S. weekly jobless claims continue to decline at 498,000 this week. This marks the first time the figure has been below 500,000 since the pandemic started last March. Meanwhile, private employment figures remain on the rise as well.”

“By and large, all this could lead to consumers having more discretionary funds to spend which bodes well for the industry,” the article added.

With a renewed appetite for spending, consumers are more apt to spend on things they want, as well as things they need.

“People like buying stuff,” a Direxion Investments “The Xchange” article said. “They also like getting to experience new and exciting things. Both of these parts of modern life have been largely put on hold in the past year due to COVID-19, and people seem ready to spend again.”

“With COVID vaccine rates continually rising in the United States (more than 32%* of the population fully vaccinated so far) the physical economic landscape is showing some vigor, and many people are finally getting out and about again,” the article said further. “As more lockdowns and restrictions seem less likely, many consumers are regaining confidence in traditional shopping, with a recent University of Michigan Surveys of Consumers study showing continued improved consumer perceptions on consumer sentiment and current economic conditions in April.”

Up over 200% the past year, seasoned traders can keep riding the “WANT” wave as the economy heats up. WANT seeks daily investment results equaling 300 percent of the daily performance of the Consumer Discretionary Select Sector Index.

“For traders looking for a short-term exposure to a bullish hypothesis on discretionary consumer spending, WANT provides a vehicle for leveraged speculation on an extremely important industry including companies like Amazon, Tesla, McDonald’s, and Starbucks,” the Xchange article said.