You are at:Home»Leveraged & Inverse Channel»U.S. 3M-10Y Yield Curve Inverts for First Time Since 2007 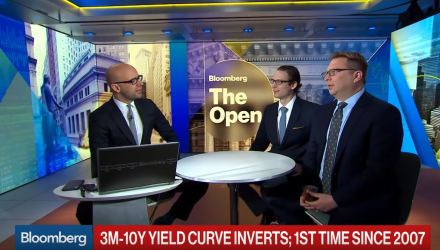 In the video below, Noah Weisberger, managing director at Sanford Bernstein, and Bloomberg’s Luke Kawa examine an inversion of the yield curve between U.S. 3-month and 10-year yields for the first time in more than a decade. They speak on “Bloomberg Markets: The Open.”