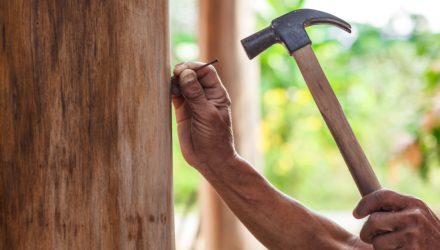 Up a Whopping 850%, This Homebuilder ETF Can Keep Hammering Out Gains

“Home-builder exchange-traded funds rallied after the Federal Reserve said it would hold off on raising interest rates at least through the end of 2023,” a MarketWatch report noted.

NAIL looks to deliver triple the daily returns of the Dow Jones U.S. Select Home Construction Index. Strength in homebuilders has been apparent as of late, as NAIL has gained 43% so far this year and a whopping 850% the past 12 months.

Traders looking to confirm the momentum can look at the one-year chart and the relative strength index (RSI). Currently, NAIL is below overbought levels, which could put the fund at an area of value. More price-oriented traders can watch the fund until it touches closer to the 50-day moving average.

Fed Clamps Down on Rate Hikes

The housing sector will continue to keep an eye on the Fed’s interest rate policy decisions. With benchmark Treasury yields ticking higher and inflation fears sparking some mini sell-offs as of late, the market remains wary.

“As widely expected, the policymaking Federal Open Market Committee also voted to keep short-term borrowing rates steady near zero, while continuing an asset purchase program in which the central bank buys at least $120 billion of bonds a month,” a CNBC report noted. “The key changes came in how central bankers view the economic road ahead and what impact that could have on policy.”

Meanwhile, the economy looks to be in full recovery mode.

“Following a moderation in the pace of the recovery, indicators of economic activity and employment have turned up recently, although the sectors most adversely affected by the pandemic remain weak. Inflation continues to run below 2 percent,” the committee said in its post-meeting statement.