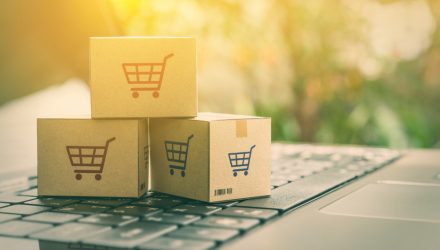 A strong retail sales number during the month of October can open up ETF plays in a pair of funds from Direxion Investments.

The ETF provider offers a plethora of tactical funds for traders and savvy investors alike. The forthcoming retail sales data this week can pave the way for leveraged gains, should bullishness reveal itself in the numbers.

“Economists predict a boom in October’s retail sales, aided by rising gasoline prices and early holiday shopping,” CNBC reports. “Retail sales are expected to rise 1.5%, up from September’s 0.7% gain, according to economists polled by Dow Jones. Excluding autos, sales are forecasted to rise 1%, compared to the 0.8% increase a month earlier, Dow Jones found.”

“There is an expectation of a strong number,” said Gargi Chaudhuri, head of iShares investment strategy Americas at BlackRock. “That’s the narrative of the last two weeks, that this is going to be a stronger-than-expected retail sales.”

Additionally, the October retail sales report will provide an early read on the GDP growth for the fourth quarter. In the referenced CNBC report, Barclays chief U.S. economist Michael Gapen expects economic expansion to the tune of 5% during the fourth quarter, which is a stronger showing than the third quarter’s 2%.

According to Gapen, the importance of a strong retail sales figure is that it “tells us is whether there’s momentum that was restored at the end of the third quarter and heading into the fourth quarter.” Additionally, it could help tamp down fears of an economic slowdown and talks of stagflation, an environment in which growth is tame while inflation is rampant.

The obvious play for retails sales data is the Direxion Daily Retail Bull 3X ETF (RETL). RETL seeks daily investment results of 300% of the daily performance of the S&P Retail Select Industry Index. With its triple leverage, RETL gives investors the ability to:

A more broad market play is piggybacking off retail sales strength that can translate to S&P 500 gains with the Direxion Daily S&P 500® Bull 3X Shares ETF (SPXL). The fund seeks daily investment results, before fees and expenses, of 300% of the daily performance of the S&P 500® Index.