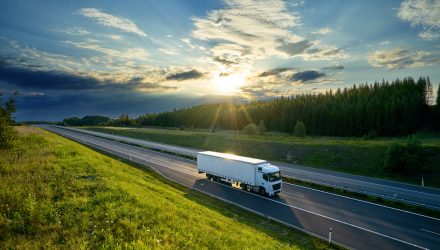 The Dow Jones Transportation Average is up almost 20 percent year-to-date (YTD), which is keeping the Direxion Daily Transportation Bull 3X Shares (NYSEArca: TPOR) on the move with its own 59.31 gain thus far this year.

The Dow Jones Transportation Average is outpacing the Dow Jones Industrial Average thus far in 2019 by about 7 percent. The strength of the average, composed of primarily 20 airline, rail and trucking stocks, is showing itself in ETFs like TPOR that track the transportation sector.

The index got help from strong first-quarter earnings results from the likes of Kansas City Southern, CSX and United Continental. From a technical standpoint, analysts are liking what they see so far.

“I think the risk/reward setup right here is very favorable,” said MKM Partners’ JC O’Hara during a “Trading Nation” segment on CNBC. “If we look at the Dow Jones Industrial Transport index, you know we’ve seen over the last few months that this pattern has been a bullish accumulation pattern taking the shape of an inverse head and shoulders and we’re actually breaking out of that pattern today.”

The transportation index is a key metric for analysts to watch in terms of assessing the health of the broad market. As far as any potential roadblocks for transportation ETFs, given the way the sector has risen at a rapid rate thus far this year, the rally could stall at some point.

“Remember the transports are coming off of 20-year high volumes in 2018, so they’re going to naturally slow,” said Chantico Global’s Gina Sanchez. “The ride isn’t going to be quite as solid as the S&P on average, but it would still be very, very good. They’re expected to grow at an earnings rate at about 10% growth for the rest of the year, so that’s still pretty good.”

“It’s particularly concerning to them (Dow Theory followers) that the Dow index that is furthest away from an all-time high is the Dow Jones Transportation Average, the oldest of the Dow indexes—older even than its better-known sibling,” wrote Mark Hulbert of MarketWatch. “That’s because the transportation sector is often considered to be a leading indicator of the broad economy on the theory that any imminent slowdown in the economy would likely show up first in the outlooks of freight transportation companies.”