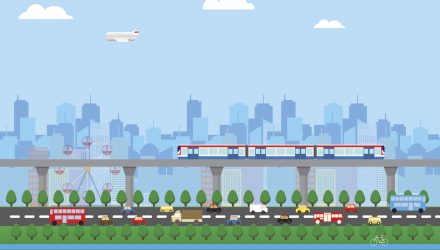 A Transportation ETF if Historical Trends Return in November

With just a few trading days left in October, active traders employing seasonal strategies are turning their attention to strategies that have historically performed well in November. If some positive historical trends pertaining to transportation stocks repeat this November,  Direxion Daily Transportation Bull 3X Shares ETF (NYSEArca: TPOR) could prove to be a leveraged exchange traded fund to consider next month.

“Union Pacific is slated to report its own third-quarter earnings before the open tomorrow, Oct. 25. The shares also enjoyed a record high in mid-September, peaking at $165.63 before pulling back to their 200-day moving average. There have been three of these signals in as many years, after which UNP stock went on to average a one-month gain of 7.59%, and was up 67% of the time. From the equity’s current perch of $144.66, a similar rally would place it just under $156,” according to Schaeffer’s Investment Research.

On Wednesday, TPOR slumped 8.73%, following the broader market lower. The leveraged transportation ETF is lower by more than 21% over the past week, indicating transportation stocks need railroad names to hold true to November form.

“In addition, seasonality is on the side of transportation stocks. Over the past decade, the iShares Transportation Average ETF (IYT)  — which boasts NSC and UNP among its top three holdings — has been the best exchange-traded fund (ETF) to own in the month of November, per White. Specifically, the fund has been higher 80% of the time, averaging a gain of 3.11%,” notes Schaeffer’s.