You are at:Home»Leveraged & Inverse Channel»Traders Turn to Inverse ETFs to Bet on a Hard Fall in China’s Economy 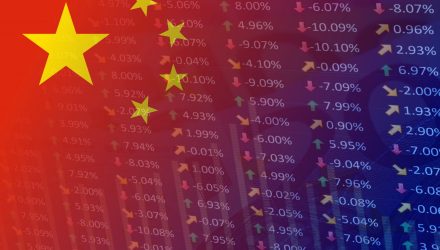 As Chinese markets plunged in the wake of heightened coronavirus fears, traders looked to inverse exchange traded funds to capitalize on the pullback in case of further weakening in China’s economy.

The Direxion Daily CSI 300 China A Share Bear 1x Shares (NYSEArca: CHAD) was the first inverse A-shares ETF to trade in the U.S. The ETF is designed to deliver the daily inverse performance of the CSI 300 Index.

Fueling the bearish China outlook, economists began to lower their growth assessment for the Chinese economy amid a spreading coronavirus that has caused Beijing to extend a Lunar New Year holiday break and pushed off work across the country. Nomura analysts have already warned that “the worst has yet to come,” MarketWatch reports.

“Based on our study of the coronavirus’ characteristics and the Chinese government’s responses thus far, we reckon the coronavirus could deal a more severe blow to China’s economy in the near term relative to SARS [severe acute respiratory syndrome]in 2003,” a team of analyst led by Ting Lu at Nomura said in a note.

Nomura’s Lu pointed out that the SARS outbreak caused a 2 percentage point fall in China’s gross domestic product over the first to second quarters of 2003.

“Based on our assumptions, real GDP growth in [first quarter]2020 could materially drop from the 6.0% pace achieved in [the fourth quarter of]2019, on a scale perhaps bigger than 2pp registered during the SARS outbreak in 2003,” Lu added.

Economists at Citigroup also mirrored the negative sentiment and warned of a slowdown in the near term.

“We expect a sharp GDP slowdown to 4.8% year-over-year in [the first quarter], with a negative seasonally adjusted quarter-on-quarter growth. Given the importance of maintaining stability and the expected larger fiscal and monetary stimulus, we forecast full-year growth to slow to 5.5% [year-over-year] for 2020,” Citigroup’s Li-Gang Liu said.