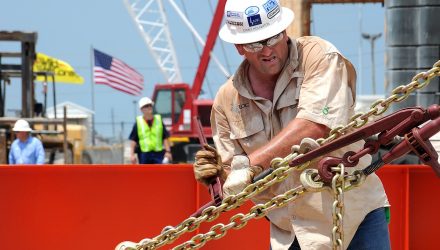 Traders Bet on an Oil Rally With This ETF

Oil prices and energy stocks are slumping, but those scenarios are not preventing some aggressive traders from making leveraged bets on an energy sector rebound.

Data confirm that in recent weeks, traders have been flocking to the Direxion Daily Energy Bull 3X Shares (ERX). ERX tracks the 300% daily performance of the Energy Select Sector Index. The recent moves into ERX could prove prescient if oil snaps out of its recent malaise.

ERX’s underlying index devotes a significant portion of its lineup to Dow components Exxon Mobil Corp. (NYSE: XOM) and Chevron Corp. (NYSE: CVX), the two largest U.S. oil companies. That due combines for over 39% of the benchmark’s weight, according to Direxion data.

With that hefty exposure to Exxon and Chevron, ERX becomes a de facto leveraged bet on those names rebounding. Traders do not seem to mind. Over the past month, ERX is averaging daily inflows of $3.26 million, good for one of the best totals among Direxion’s leveraged bullish ETFs, according to issuer data.