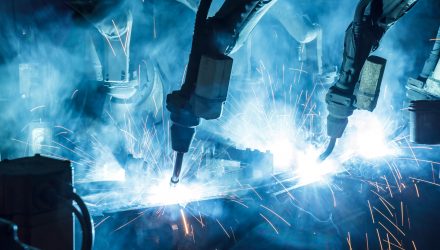 While 2019 saw the stock market roar to new heights, the U.S.-China trade war and weaker demand did a number on robot installations in 2019. Nonetheless, this could be a buy-the-dip opportunity for investors looking to capitalize on a robotics industry that’s still primed for growth.

Per a Reuters report, “US companies installed fewer robots in 2019 than they did the year before, the first cut back since 2015, as a downturn in manufacturing fueled by trade wars and weaker demand dampened appetite for the machines.”

“Shipments fell to 23,758, a more than 16 percent drop, according to data seen by Reuters that was set for release on Tuesday by the Association for Advancing Automation, an industry group based in Ann Arbor, Michigan,” the report added.

However, according to the report, this is a temporary speed bump. Per the report, “Alexander Shikany, vice president of the Association for Advancing Automation, said the slowdown is likely to be short lived. Orders for new robots in North America, a separate measure that gives a sense of how many machines will be installed in future months, increased last year by 1.6% to 29,988 units, Shikany noted.”

Traders can take advantage of robotics growth via the Robotics & AI Bull 3X ETF (NYSEArca: UBOT). UBOT seeks daily investment results equal to 300 percent of the daily performance of the Indxx Global Robotics and Artificial Intelligence Thematic Index, which is designed to provide exposure to exchange-listed companies in developed markets that are expected to benefit from the adoption and utilization of robotics and/or artificial intelligence.

The robotics space is certainly in a push-pull dichotomy of investors capitalizing on the latest in disruptive technology, while at the same time, getting push back from those threatened by the wider adoption of robots. The fears are warranted given that robotics technology has the capacity to supplant human jobs.