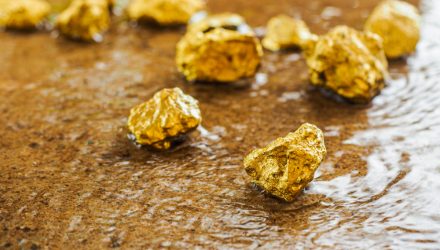 This Leveraged Gold Mining ETF Is Up Over 30% YTD

A move towards safe haven assets like gold is fueling leveraged exchange traded funds (ETFs) like the Direxion Daily Gold Miners Bull 3X ETF (NUGT), which is up 30% on the year.

Market uncertainty surrounding Russia’s invasion of Ukraine certainly has a hand in the move higher for gold. As volatility is racking stock market indexes around the globe, gold is one of the go-to safe havens to escape the market fluctuations.

In the wake of Western sanctions on Russia, which are causing the local currency to falter, more Russians have been buying gold as a store of value. It’s not just large investors wanting a piece of gold, but more households as well.

“Currently, households’ demand for buying physical gold in bars has increased, driven, in particular, by the abolition of value-added tax on these operations,” the Russian central bank said in a statement, according to a Reuters report.

NUGT invests in swap agreements, futures contracts, short positions, or other financial instruments that, in combination, provide inverse or short leveraged exposure to the index equal to at least 80% of the fund’s net assets. The index is a modified market capitalization-weighted index comprised of publicly traded companies that operate globally in both developed and emerging markets and are involved primarily in the mining of gold and, to a lesser extent, silver.

U.S. markets in particular will be fixated on what the Federal Reserve will say when it’s expected to raise interest rates. How hawkish the Fed will be is a strong determinant of how gold will react in the near term.

The crisis in Ukraine will be a further catalyst for gold in global markets. While the precious metal has receded recently on hopes that negotiations between Russia and Ukraine will bear fruit, nothing is ever certain.

“I wouldn’t call this (the recent rally) the peak in gold just yet, because this (Ukraine) situation is still uncertain. It’s so fluid,” Julius Baer analyst Carsten Menke said.