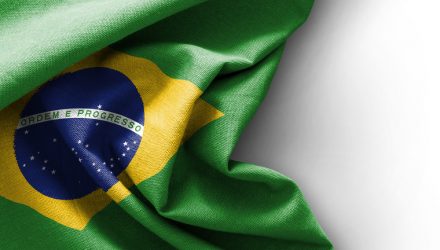 This Bullish Brazil ETF Is Up Close to 50% YTD

A strong dollar and global inflation are supposed to keep down emerging markets (EM), but Brazil isn’t listening. The Direxion Daily MSCI Brazil Bull 2X ETF (BRZU) is up over 50% and could keep on climbing if momentum stays in its favor.

From a non-leveraged perspective, that strength could also be traced to the iShares MSCI Brazil ETF (EWZ), which is up 25% for the year. The largest economy in Latin America appears to be doing something right, but what exactly?

The country sloughed off the Omicron variant of COVID-19 quickly, which minimized the hit on its economy in the first quarter, according to a MarketWatch article. Furthermore, its economy expanded by 1% during the first quarter and 1.7% from a year ago, giving the country excellent growth prospects for investors.

“The better activity in the first quarter was because the continuing reopening of the economy had a bigger impact than we expected, and the Omicron wave was less strong,” said Carlos Pedroso, chief economist at Banco MUFG Brasil. “What surprised me was the 1% growth in the quarter came on top of those revisions, on top of a bigger base.”

One of the country’s shining stars from a business sector standpoint was the service sector. However, the country isn’t immune to inflation, and some economists foresee that rising consumer prices will eventually take their toll.

“Services activity was quite buoyant, but that’s not surprising, it was the residual effects of the reopening of the economy,” said Alberto Ramos, economist at Goldman Sachs. “The second quarter should still be a decent quarter because of the carryover effect from the first, but we anticipate a more difficult second half because of the lagged effect of inflation, higher interest rates.”

That said, investors will want to tread lightly when looking at Brazil as a potential opportunity. A weaker economy in the second half of 2022 could have political ramifications as well, which is par for course when trading in any EM country.