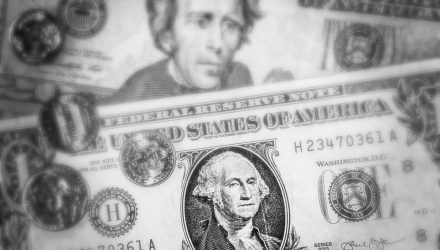 “Inflation may look like a problem that will go away, but is more likely to persist and lead to a crisis in the years ahead, according to a warning from Deutsche Bank economists,” a CNBC report said. “In a forecast that is well outside the consensus from policymakers and Wall Street, Deutsche issued a dire warning that focusing on stimulus while dismissing inflation fears will prove to be a mistake if not in the near term then in 2023 and beyond.”

TYO seeks daily investment results before fees and expenses equal to 300% of the inverse (or opposite) of the daily performance of the ICE U.S. Treasury 7-10 Year Bond Index. The index is a market value weighted index that includes publicly issued U.S. Treasury securities that have a remaining maturity of greater than seven years and less than or equal to ten years.

Year-to-date, the fund is up a smidge over 13%. The prevailing sentiment is that the Federal Reserve will eventually have to raise interest rates.

A Trigger-Shy Fed Could Hamper the Economy

All eyes are seemingly fixated on the Federal Reserve when it comes to future interest rate policy. The capital markets are waiting to see just how long the Fed can go without raising interest rates and allowing the economic recovery from reaching an overheated state.

“The consequence of delay will be greater disruption of economic and financial activity than would be otherwise be the case when the Fed does finally act,” said Deutsche’s chief economist, David Folkerts-Landau. “In turn, this could create a significant recession and set off a chain of financial distress around the world, particularly in emerging markets.”

Folkerts-Landau contends that the longer the Fed waits, the more dire the consequences.

“It may take a year longer until 2023 but inflation will re-emerge. And while it is admirable that this
patience is due to the fact that the Fed’s priorities are shifting towards social goals, neglecting inflation leaves global economies sitting on a time bomb,” Folkerts-Landau added. “The effects could be devastating, particularly for the most vulnerable in society.”