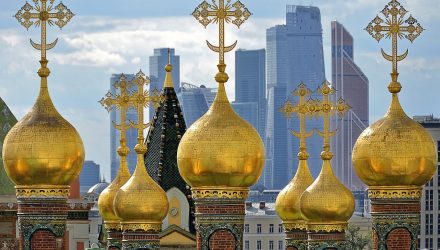 Russian Bulls Charged the Markets Head on in June

The bulls in Russian equities were charging hard during the month of June, which saw the Direxion Daily Russia Bull 3X ETF (NYSEArca: RUSL) add “another 13.5% to approach levels it hasn’t seen since the start of 2018,” according to a Direxion Investments Xchange post.

“Russian stocks surged more than any other international market in June, adding another wrinkle to what is already one of the most closely watched global relationships,” noted a Direxion Investments blog post. “In the wake of June’s rebound, the MVIS Russia Index (MVRSXTR), which tracks a blend of large- and mid-cap Russian companies, finds itself at its highest level since February 2018.”

However, it’s been a double-edged sword for RUSL. While it’s been a top performer, it’s also seen a number of investors going in and subsequently, out of the fund.

“However, while RUSL is one of the top performers of Direxion’s stable of leveraged ETFs for 2019, thanks in large part to this recent surge, it’s also seen some of the heaviest investor outflows at -$60 million in net redemptions over the course of June, with more than two-thirds of that occurring in the days following its new 52-week high,” the post said.

Last year, RUSL was affected by lot of geopolitical relations between the United States and Russia as US sanctions included a potential ban on dollar transactions that involve state banks, which set the stage for a scenario where Russia would switch to other currencies in international trading.

Further sanctions by the US threatened to put pressure on the Russian economy, particularly the energy sector. In addition, under the Chemical and Biological Weapons Control and Warfare Elimination Act (CBW Act), the US had plans to ban sales of dual-purpose technology to Russia–a response to the country’s purported involvement in the poisoning in the UK of double agent Sergei Skripal and his daughter.

Despite these looming geopolitical questions, some analysts are still positive that Russia’s economy can persevere and it did just that during the month of June.

Russia poses an interesting opportunity due to its price relative to its fundamental valuation, making it an attractive option for value investing–a case for RUSL. Either way, Russia gives ETF investors an opportunity to profit for additional bulls who have a healthy appetite for risk.

This will rely heavily on Russia’s ability to feed off a strong energy sector.

“Ultimately, Russia’s strength as an international investment rests with the strength of its energy production,” the post said. “Should the recent turn in U.S. production persist, and while Iran remains under strict sanctions, Russia’s bull run looks to have plenty of gas in the tank.”