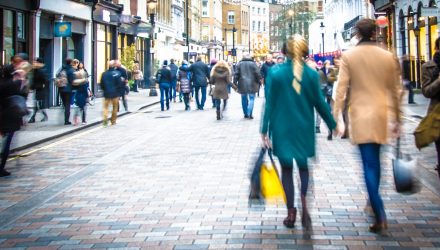 It’s no question that the capital markets are waiting for a trade deal to materialize as ongoing negotiations forge on between the U.S. and China, but the retail industry, in particular, is urging U.S. President Donald Trump to end the trade war following the State of the Union address on Tuesday.

“Achieving structural reforms, ending existing tariffs and putting an end to the trade war would provide much-needed certainty and relief for American businesses and families,” said Matthew Shay, head of the National Retail Federation (NRF). “We encourage the administration to continue to focus on the end goal, and for Congress to restore, rather than further neglect, its role in trade policy.”

The NRF’s plea comes as U.S. sales from Nov. 1 through Christmas Eve of last year rose by 5.1 percent to over $850 billion based on the latest numbers from Mastercard SpendingPulse, which tracks spending in brick-and-mortar stores as well as online stores. In addition, online sales were also up 19.1 percent versus a year ago as more consumer spending habits shift to the internet from brick-and-mortar stores.

“The overall economy, in our view and based on the conversations we’ve had and the data we see, is very solid,” Shay said. “The truth is the consumer is in a very good place and continues to be in a very good place, and consumer spending is obviously fundamental and central to our overall outlook.”

The NRF is projecting retail sales figures to grow from 3.8 to 4.4 percent, which is lower than the 4.6 percent growth experienced in 2018. The trade group said the lower forecast comes “despite threats from an ongoing trade war, the volatile stock market and the effects of the government shutdown.”