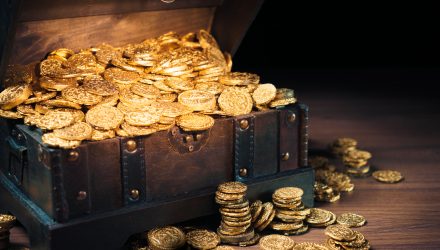 The prospect of future rate cuts by the Federal Reserve saw gold surpass its 5-year high on Wednesday after the central bank said it “will act as appropriate to sustain” economic expansion. To an optimistic capital market, that meant the door was open for interest rates to fall in 2019 after staying static thus far through the middle of the year.

“With the move higher in gold we noticed great performance from NUGT (Direxion Daily Gold Miners Bull 3X), as the fund closed 4% higher and is up nearly 20% since the 11th of June as investors have moved to safety,” WallachBeth Capital wrote in an email.

Other Gold ETFs to Consider

“We’ve had 75 years of expanding globalization and trade… and now all of a sudden it’s stopped,” said hedge fund manager and philanthropist Paul Tudor Jones. “That would make one think that it’s possible we go into a recession; it would make one think that rates in the United States go back down to the zero bound level; gold in that situation is going to scream. [Gold] will be the antidote for people with equity portfolios.”