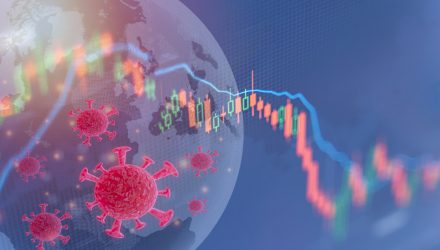 Exchange-traded funds (ETFs) and similar instruments such as exchange-traded notes (ETNs) have typically been the best strategies for long-term investment. Even generic funds such as SPY (which tracks the S&P 500 index) earned investors an average annual return of 10-11% since mid-20th century. An even greater revenue (around 15%) can be earned from specialized funds such as RPG, whose basket only includes stocks from companies with high growth rates.

However, COVID-19 has changed this. The indices plummeted in February and March, and, even though they have mostly recovered by now, they have not earned their investors significant profits yet. On the other hand, the pandemic has also caused the stock prices of many companies to rise, as the demand for their products increased. This was true of some ETFs as well, as they turned out to be much more profitable than the more typical ETFs such as SPY.

All the data in this article is current as of June 25, and the ratings are based on the etf.com database.

Fear Can Be Profitable

The most successful funds since the beginning of this year have been those that track the VIX index. This is the Chicago Board Options Exchange (CBOE)’s volatility index, also often referred to as the fear index. The assets’ volatility increases uncertainty, and makes the investors fear unexpected changes. In such a situation, the market’s participants try to hedge themselves against any significant change in asset price, in either direction. One of the common means of hedging is through options, and this causes premiums to grow for both put and call options. The value of these premiums is what the VIX index reflects. Although the index is linked to the CBOE, it is also inextricably tied to the volatility of many assets from different exchanges – from gold to large stock portfolios, reflected in indices such as S&P 500 (500 largest companies in the US), Dow Jones (30 largest companies), and so on.

While the VIX was at 13-15 in mid-February, by mid-March it shot up to nearly 83 (out of 100). Currently it stays within the 30-40 range. Those who bet on the index growing made a serious profit. Let us list some successful funds tied to the VIX. The total increase in asset prices for the fund since the beginning of the year is given in parentheses.

It should be pointed out that all of these funds showed the best results when calculated over the last half-year period, while over the last 1-3 months the results were far more modest, or sometimes even negative. The main reason why they did so well was due to the mass sale of assets in March. The greatest profits were gained by those who invested in these funds before the start of the pandemic. Currently, however, the above funds are probably not going to be a particularly profitable investment, since the level of uncertainty that was seen in March is unlikely to be seen again, even in the event of a second wave of the outbreak.

It should be noted that in March there was enormous uncertainty over the pandemic. Nobody knew yet how strict the quarantines needed to be, how long they were going to last, what measures the governments were willing to take to support the people, and what kind of restrictions they were capable of enforcing. Other unknown variables the likelihood of reinfection, the percentage of asymptomatic carriers, and how this percentage changed with quarantine measures in effect. Today our knowledge of COVID is much more extensive, and that is why the populace acting more boldly now, as well as why the stock market is recovering. Because of that, one should not take the above list of funds as investment tips. Rather, these are examples of funds that were affected positively by the pandemic.

Investing in Natural Resources Can Also Be Good

In the spring, we witnessed a colossal oil crisis caused by the worldwide drop in oil consumption and the OPEC+ scandal. In March, the price of Brent oil dropped from over $50 to $20 per barrel. The April agreement to reduce oil production by 9.7 million barrels per day has already managed to bring the oil price back to around $40, but a further price increase may turn out to be slower.

The investors that bet on oil prices going up at the beginning of the year have suffered losses. However, some commodity funds have shown great results. Some of them have circumvented the crisis by betting on the market crashing rather than growing. However, some funds that bet on the growth of the mining sector also show good results.

Even though this is the investment path that was supposed to give maximum returns, it is still only third in our rating. The most successful funds here have only shown a rate of return around 70%, which is a great deal less than for the funds that “profit on fear”. However, the asset prices for the funds listed in this section did not go down after March, and they are still increasing.

What About the Classic ETFs?

For comparison, let us see the rates of return shown by the more popular funds – in particular, the generic US SPY fund, the US “blue chip” DIA fund, the RPG fund that tracks growing companies, and the RPV fund that tracks mature, moderately rated companies.

This means that the most popular ETFs no longer seem to be in a catastrophic situation – some have already broken even (or about to do so) compared to the beginning of the year. However, one should still remember that the SPY and the DIA are not the only ETFs available on the market. There are more profitable funds around, and it is just a matter of finding one.

The returns from the high-tech funds that gained popularity due to the pandemic are still lower than the returns from funds that grew precisely because of the disasters on the stock and commodity markets. However, there is a long-term advantage to investing in cutting-edge technology companies and funds. Their success does not depend on constant panic from investors and consumers. Funds like CLIX and WCLD continue to grow, while the funds that “hit the jackpot” on investors’ confusion in March or the crash of the commodity prices are losing ground as the tension subsides. The technological innovations that were introduced during the pandemic will most likely find some use afterwards as well. It is the high-tech ETFs listed in this review that are perhaps the best choice for long-term investment.