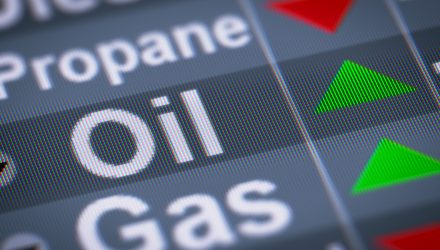 On Wednesday, oil prices were up more than 1% after the latest data from the U.S. Energy Information Administration revealed a steep fall in U.S. crude stockpiles. Brent crude futures were1.7% higher to reach a price of $60.52 a barrel while WTI crude futures were 1.5% higher to $55.75 a barrel.

Leveraged bull traders certainly cheered the move when it looked like worries of oversupply and weaker global demand would put downward pressure on oil prices.

“It was an incredibly bullish report, one of the more bullish we’ve had in a while, with draws across the board and of course the massive crude oil drop, which was generated by another drop in imports,” said John Kilduff, a partner at Again Capital in New York. That draw down was likely due to a drop in Saudi exports to the U.S, Kilduff said.

The markets have been roiled by the U.S.-China trade war news, which looks like it could extend into extra innings. Furthermore, the bond markets were flashing recession signals from an inverted yield curve.

“News of tightening oil supplies certainly pumped some excitement into the Dow this morning,” said Mike Loewengart, vice president of investment strategy at E*Trade. “When it comes to the yield curve, the inversion is certainly an unnerving indicator for investors. But taken in aggregate, it’s just one of many data points we can look at when reviewing the economy. That said, there are more than a few signals showing sluggish growth and with GDP news on deck, this could be critical in evaluating if we’re continuing on that path.”

“The price of oil surged higher this morning due to the U.S.-Iranian tensions, since after the negative developments at the G7 meeting in France, a deal on the Persian country’s nuclear program seems unlikely,” said Ken Berman, Gorilla Trades strategist. “The crucial commodity appreciated even more before midday as U.S. crude oil inventories declined by way more-than-expected, so the materials sector could lead the way higher in the afternoon.”

Traders looking to make a play on oil can look to leveraged exchange-traded funds (ETFs).