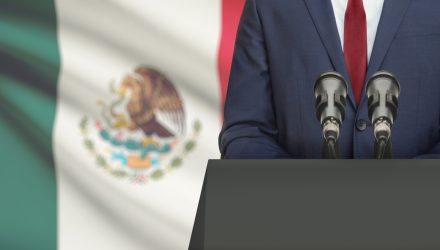 Saturday marks the inauguration for Mexico’s newest president as Andrés Manuel López Obrador will take office and his policies, as he gets into the thick of his presidency, will weigh heavily on the Direxion Daily Latin America Bull 3X ETF (NYSEArca: LBJ).

Lopez Obrador will inherit a host of issues to fix in Mexico, but as the country faces an influx of migrants from Central America who have congregated near the U.S.-Mexico border in Tijuana, this latest development has come to the forefront of his expansive to-do list.

U.S.-Mexico relations will be tested in the forthcoming weeks as the border situation has reached stratospheric levels in terms of media attention. With U.S. President Donald Trump coming under fire as images of U.S. border patrol agents teargassing migrant women and children flooded media outlets, the situation has become only more tense.